Genes that allow some people to thrive on just four hours of sleep each night may also play a role in warding off dementia, scientists claim.

A study in mice found two genetic mutations carried by ‘elite sleepers’ slowed the build-up of toxic proteins in the brain — a hallmark of the memory-robbing disease.

The link between sleep and dementia has been established for years, with studies suggesting poor quality or too little shut eye increases the risk.

Toxins are cleared out from the brain and other parts of the body during sleep, which keeps our mind and muscles rejuvenated the following day.

Sleep researchers at the University of California, San Francisco believe the genes — found in up to 5 per cent of people – allow people to do this more efficiently.

For most people, doctors recommend between seven and nine hours per night, with eight considered the sweet spot. But some people, dubbed ‘elite sleepers’, can reap the benefits after as little as four hours.

It has been speculated famous carriers of the genes could include ex-US President Donald Trump, who famously only sleeps four to five hours a night.

Elon Musk and Dwayne ‘The Rock’ Johnson also claim to only get between three to six of hours of shut eye each night. 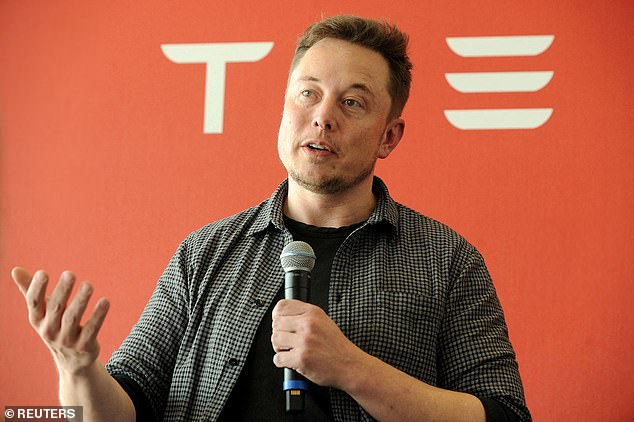 Billionaire Tesla founder Elon Musk, infamous for his bizarre social media rants, sleeps for just six hours per night. Musk is pictured during a media tour of the Tesla Gigafactory in Nevada

Dwayne ‘The Rock’ Johnson, pictured at the Superbowl in Los Angeles last month, adheres to a sleep schedule which send most craving for a nap, with the actor only clocking three to five hours of shut-eye each night

Alzheimer’s disease is a progressive, degenerative disease of the brain, in which build-up of abnormal proteins causes nerve cells to die.

This disrupts the transmitters that carry messages, and causes the brain to shrink.

More than 5million people suffer from the disease in the US, where it is the 6th leading cause of death, and more than 1million Britons have it.

As brain cells die, the functions they provide are lost.

That includes memory, orientation and the ability to think and reason.

The progress of the disease is slow and gradual.

On average, patients live five to seven years after diagnosis, but some may live for ten to 15 years.

Senior author of the study, Professor Ying-Hui Fu, an expert in neurology, said she hoped their findings could lead to the development of new drugs to help brain disorder patients have more restful sleep and stave off conditions like dementia.

‘Many parts of your brain have to work together for you to fall asleep and to wake up,’ she said. ‘When these parts of the brain are damaged, it makes it harder to sleep or get quality sleep.

‘This work opens the door to a new understanding of how to delay and possibly prevent a lot of diseases.’

Professor Fu and her team in California have been studying the genetics behind ‘elite sleepers’.

They previously identified five genes found in people that play a role in elite sleeping — getting between four to six hours a night without any apparent negative health effects.

In their latest experiment, they tested two of these gene mutations called DEC2-P384R and Npsr1-Y206H.

They bred two groups of rodents with a predisposition to Alzheimer’s, the most common form of dementia, to carry one of each of these genes.

Analysing the brains of the mice after three and six months, they found rodents with the short sleep genes had less of the abnormal proteins thought to play a role in Alzheimer’s, compared to a control group.

Publishing their findings in the journal iScience, they said it demonstrated the genes may slow the progression of the disease.

Dementia is one of the leading causes of death in the UK and charities estimate roughly 900,000 people in Britain and 5million in the US are living with the disorder, with that number growing each year as we live longer.

Fellow senior author neurologist Dr Louis Ptacek added that their study added to their previous work challenging the ‘dogma’ that everyone needs eight hours of sleep per night.

‘There’s a dogma in the field that everyone needs eight hours of sleep, but our work to date confirms that the amount of sleep people need differs based on genetics,’ he said.

‘Think of it as analogous to height; there’s no perfect amount of height, each person is different. We’ve shown that the case is similar for sleep.’

Not getting enough sleep has being linked to a number of other conditions such as obesity, heart disease, high blood pressure, and diabetes.

However, experts have debated on whether if it is the amount of sleep or the quality, how restful your sleep is, that is the key driver for health.

The researchers have so far identified five genes linked to ‘elite sleeping’ that run in families, but add there are many more yet to be discovered.

While they estimate it could take a decade to develop new treatments based off their research, they highlight how one of the genes they’ve identified can already be targeted with existing drugs.

This means the drugs could be repurposed to help stave off dementia which is quicker than developing a new medication from scratch.

A number of celebrities, politicians, and entrepreneurs swear by only having four to six hours of sleep per night, with some attributing their success to it.

Former US President Trump and his predecessor Barack Obama both had famously short sleep cycles in the their time in office, of about between four to five hours.

It is not known if any of these famous figures have the ‘elite sleeper’ genes or if they instead force themselves to stick to a short sleep cycle regime.

There is currently no cure for dementia but a number of drugs are used to slow the progression of the condition with these being more effective the earlier it is spotted.

Experts have warned of a potential global dementia time bomb, with 153million people predicted to be living with the condition worldwide within decades.