Just had Covid? Beware… you can get reinfected within just 20 DAYS: Spanish health worker battled Delta and Omicron within three weeks of each other, scientists find

People can get reinfected with Covid within three weeks, scientists say.

Experts have told how a 31-year-old Spanish healthcare worker battled Delta and Omicron within a 20-day period.

Researchers believe the unidentified woman’s case is the shortest reinfection gap since the pandemic began.

The woman, whose battle with the virus was showcased at a medical conference, had received her Covid booster vaccine.

Doctors in Catalonia who treated her it shows fully jabbed people ‘cannot assume they’re protected against reinfection’ — even if they have battled the virus before.

Dr Gemma Recio, of the Institut Catala de la Salut, added: ‘This case highlights the potential of Omicron to evade the previous immunity acquired either from a natural infection with other variants or from vaccines.

‘In other words, people who have had Covid cannot assume that they are protected against reinfection, even if they have been fully vaccinated.’ 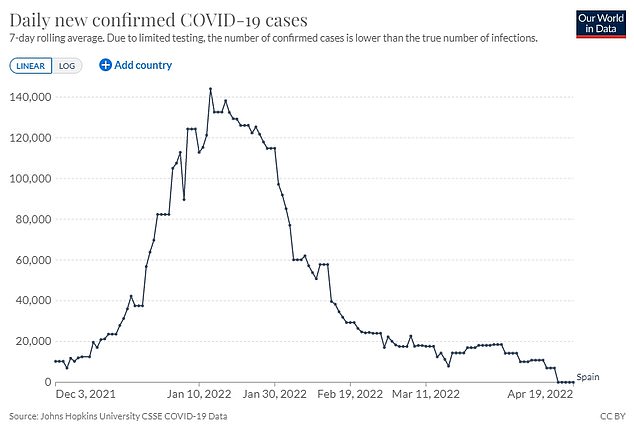 Spain, like many European nations, experienced a surge in Covid cases in December and January driven by the new Omicron variant

Seven Brits have already caught what is thought to be the most contagious version of Omicron yet.

The BA.2.12.1 sub-strain already makes up a fifth of cases in the US, in a sign of what could come in Britain.

Little is known about the new version of the virus, though it is believed to have an up to 27 per cent growth advantage over BA.2, which was behind the latest surge in UK cases and is itself a subvariant of Omicron.

However, top scientists insist there is no evidence that BA.2.12.1 is more severe than its mild predecessor.

British experts told MailOnline they are not concerned by its emergence because of the UK’s high levels of immunity following the recent domestic surge.

But the true number of Britons infected with the sub-strain is likely to be higher.

The international database suggests the first BA.2.12.1 case was detected in Canada in the week of January 17.

However, she added that previous infection and jabs ‘do seem to partially protect against severe disease and hospitalisation in those with Omicron’.

The woman received her Covid booster 12 days prior to testing positive for the virus in December 2021 through her work’s routine swabbing programme.

Lab tests later showed her first bout of the illness — which caused her no symptoms — was with the Delta variant.

She isolated for 10 days before returning to work in January. It is not clear i she had to test negative before starting work again.

However, she soon began to suffer from the tell-tale symptoms of Covid – a cough and fever.

Another test revealed she was positive again and genetic analysis revealed she had caught the Omicron strain.

‘This case also underscores the need to carry out genomic surveillance of viruses in infections in those who are fully vaccinated and in reinfections,’ Dr Recio added.

‘Such monitoring will help detect variants with the ability to partially evade the immune response.’

The case is being presented to the European Congress of Clinical Microbiology and Infectious Diseases in Portugal.

Covid reinfections are not rare — hundreds of thousands of Britons have caught the virus twice since the pandemic began, data suggests.

Immunity is never perfect, meaning the virus can still slip through the defences of people who’ve been vaccinated and survived the virus.

Some variants, such as Omicron, carry mutations that allow it to evade the body’s virus-fighting arsenal easier.

The UK Health Security Agency believes almost 800,000 Britons have caught Covid twice over the course of the pandemic.

Around 8,700 people are thought to have been infected three times, and 74 Britons have tested positive four times since the start of April 2020.