Russia’s football captain Artem Dzyuba has finally broken his silence on his country’s invasion of Ukraine after being slammed by Ukrainian players.

In a statement released on Instagram, the 33-year-old Zenit St Petersburg striker described war as a ‘frightful thing’.

But Dzyuba didn’t condemn Russia’s aggressive actions, spoke of his pride in his nationality and hit back at the Ukrainian footballers ‘who sit on their a** in mansions in England’ who were saying ‘nasty things’.

Everton and Ukraine defender Vitaliy Mykolenko had called Dzyuba a ‘silent b***h’ and his Russian national team colleagues ‘s***heads’ for not speaking out to condemn the war, adding ‘you and your kids will spend your lives in a dungeon.’

It came after Manchester City defender Oleksandr Zinchenko launched a verbal assault on Russian president Vladimir Putin, whom he called a ‘creature’ and wished a ‘painful death’. 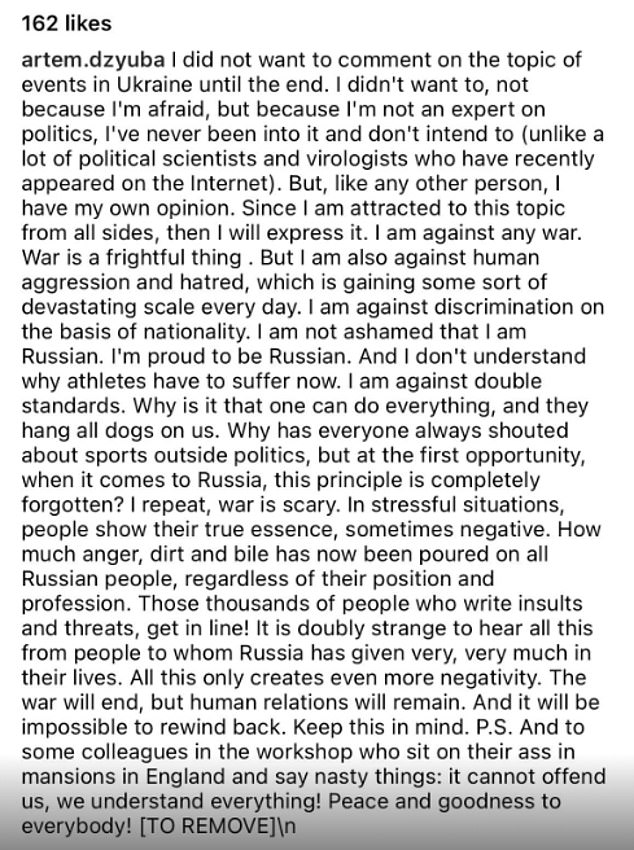 In an Instagram post on Wednesday, Dzyuba wrote: ‘Until recently, I did not want to speak on the topic of events in Ukraine.

‘I didn’t want to, not because I’m afraid, but because I’m not an expert in politics, I never got into it and didn’t intend to (unlike a large number of political scientists and virologists who have recently appeared on the Internet).

‘But like everyone else, I have my own opinion. Since I am being drawn to this topic from all sides, I will express it.

‘I am against any war. War is a frightful thing. But I am also against human aggression and hatred, which is gaining some sort of devastating scale every day.

‘I am not afraid that I am Russian. I’m proud to be Russian. And I don’t understand why athletes have to suffer now. I am against double standards. 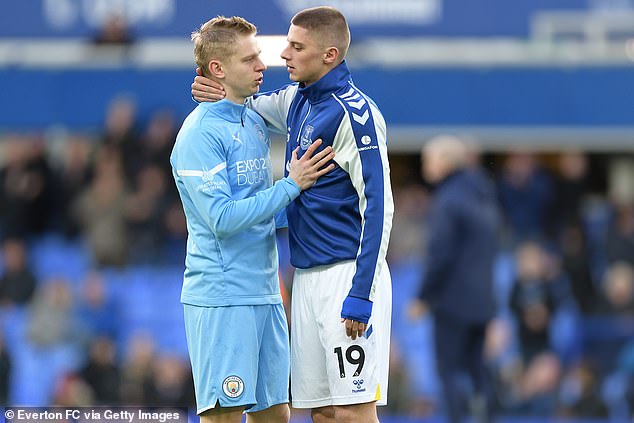 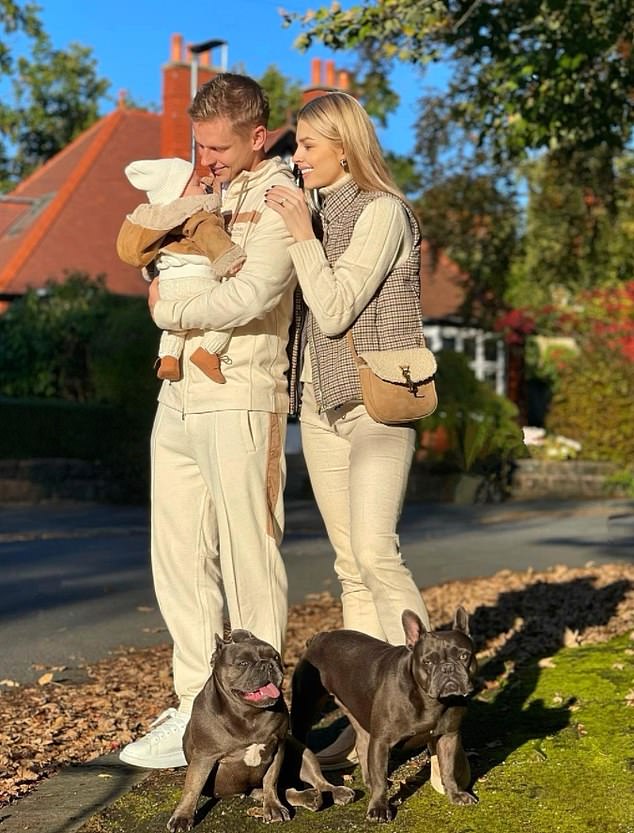 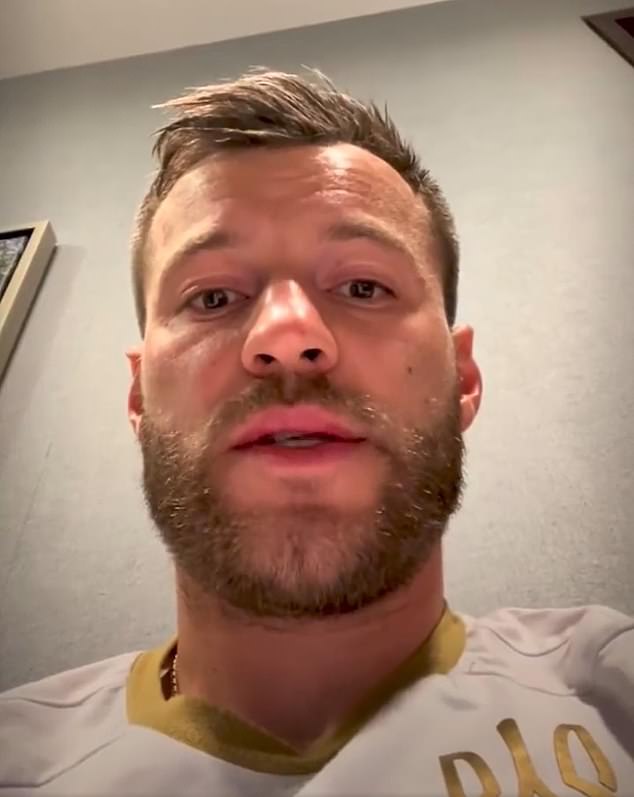 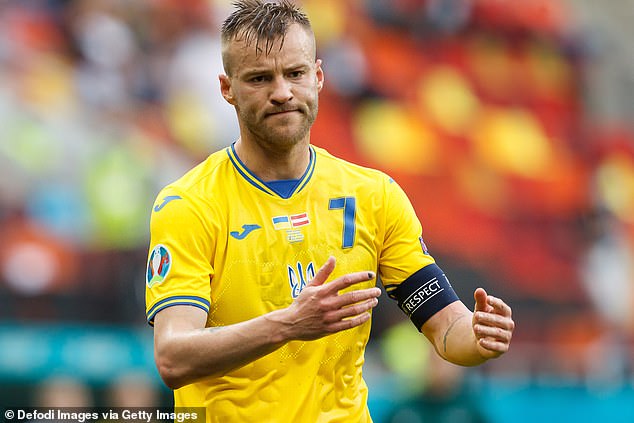 ‘Why is it that one can do everything, and they hang all dogs on us.

‘Why has everyone shouted about sports staying outside of politics but, at the first opportunity, when it comes to Russia, this principle is completely forgotten?

‘I repeat, war is scary. In stressful situations, people show their true essence, sometimes negative. How much anger, dirt and bile has now been poured on all Russian people, regardless of their position and profession.

‘Those thousands of people why write insults and threats, get in line!

‘It is doubly strange to hear all this from people to whom Russia has given very, very much in their lives. All this only creates more negativity. 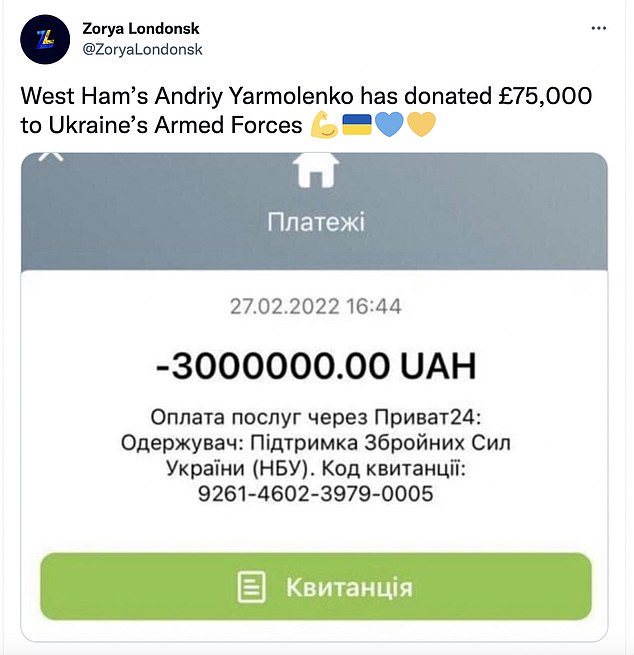 Yarmolenko has reportedly made a huge £75,000 donation to Ukraine’s Armed Forces 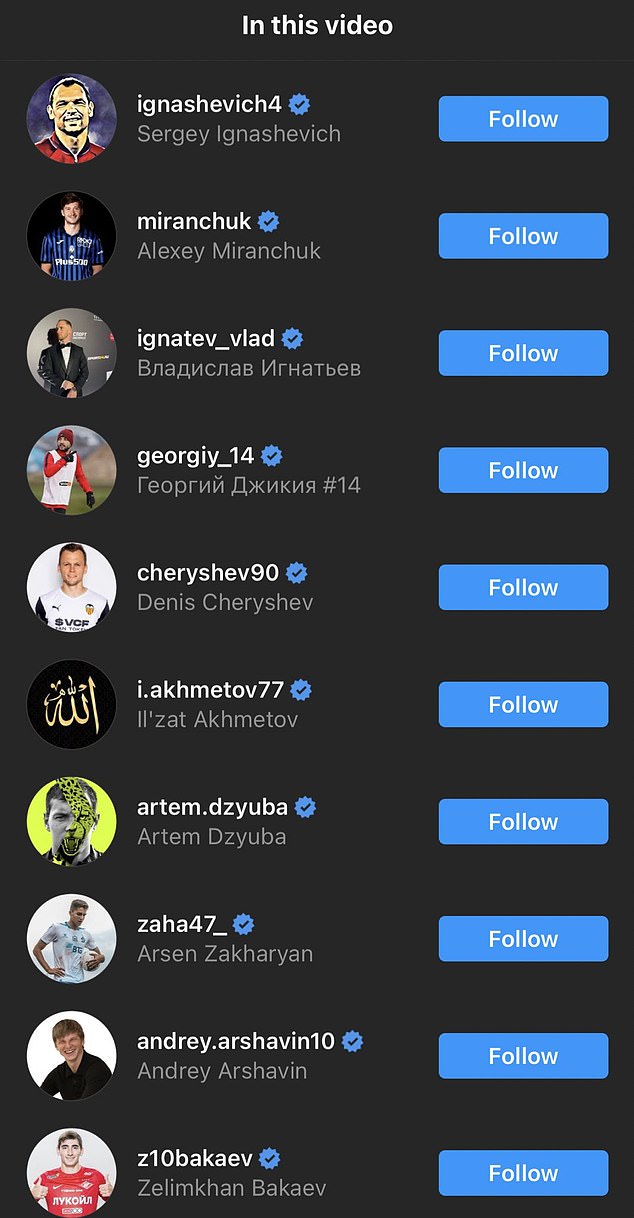 The 32-year-old tagged a number of Russian footballers, including captain Artem Dzyuba 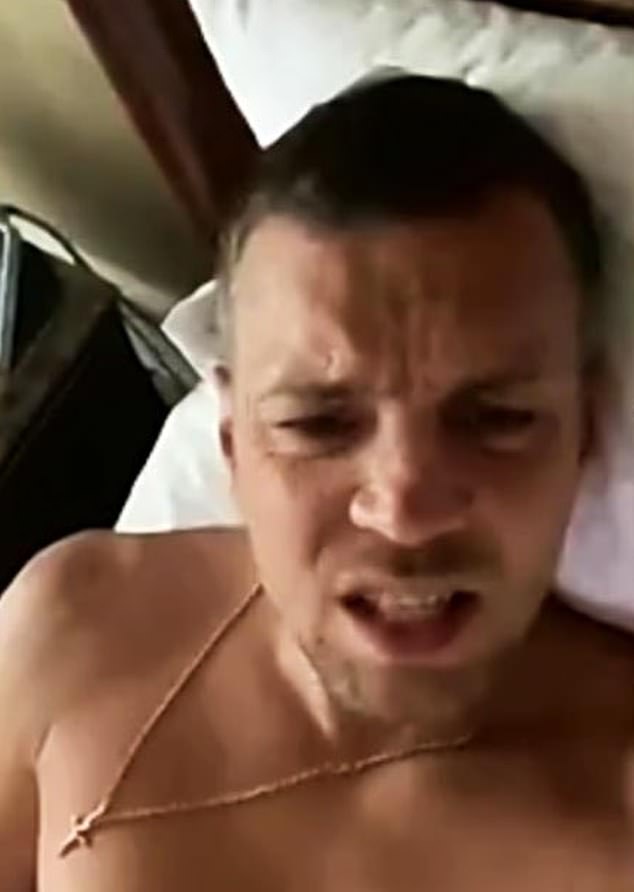 ‘The war will end but human relations will remain and it will be impossible to rewind back. Keep this in mind.’

He added: ‘And to some colleagues who sit on their a** in mansions in England and say nasty things: It cannot offend us, we understand everything! Peace and goodness to everybody!’

It came after Russia were kicked out of qualification for this year’s World Cup in Qatar, with Poland given a bye to the play-off final against either Sweden or Czech Republic later this month.

All three national associations had refused to play against the Russian team, part of a broader ‘cancelling’ of the nation’s athletes and sports teams from international sport.

Several national teams have stated they won’t play Russia at any level until further notice in protest at their actions in Ukraine. 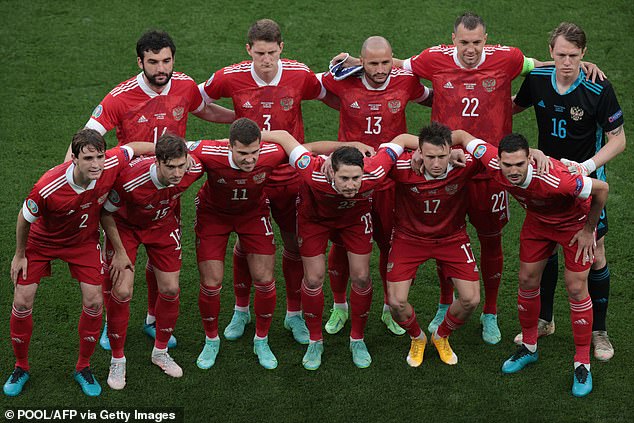 UEFA are almost certain to kick Russia out of the women’s Euros in England this summer, when they are due to play group matches against Holland, Switzerland and Sweden and could have faced England in the semi-finals.

Meanwhile in the Europa League, Spartak Moscow were removed with German side RB Leipzig advancing to the quarter-finals as a result.

The IOC recommended similar bans be introduced by all sports, with the possible exception of the Winter Paralympics due to the proximity of the Games, which begin in Beijing on Friday.

Russian domestic sport and leagues were permitted to continue.

In Formula One, Nikita Mazepin, who is the son of a billionaire oligarch with close links to Russian president Putin, was allowed to continue to drive for the Haas team but only under a neutral flag.

Yarmolenko took his support of his homeland one step further on Wednesday as he took to Instagram to slam Russian footballers for remaining silent in the wake of the violence.

‘I have a question for Russian players. Guys, why are you sitting like s***heads, and not saying anything?

‘In my country they’re killing people, killing wives, killing mothers, killing our children. But you saying nothing, you’ve given no comments.

‘Tell me please, what will happen if all of you together, united, show the people what is really happening in my country.

‘I know a lot of you, I’m familiar with many of you and you all told me “it shouldn’t be like this”, that your president is acting incorrectly.

‘So guys, you have influence over the people, show this, I am asking you, please!

‘Thank you for your attention! Glory to Ukraine.’

It came as the Ukrainian capital Kyiv braced for an assault from a 40-mile long convoy of Russian tanks and armoured vehicles with the conflict likely to enter a bloody new phase.

Five people were killed in a rocket strike on the city’s television tower on Tuesday and the city’s mayor, former boxer Vitali Klitschko warned Russian forces were ‘getting closer’. 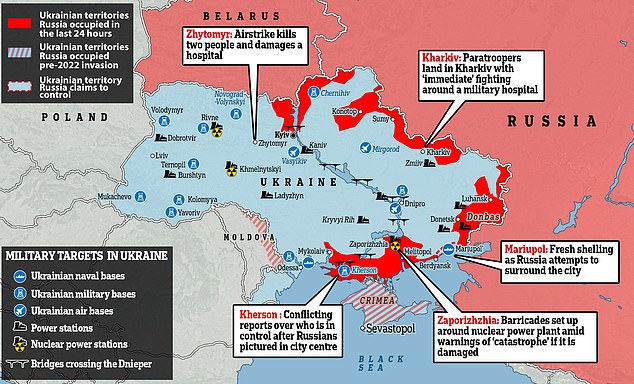 Ukraine’s military said Russia today renewed its assault ‘on all fronts’, with paratroopers landing in Kharkiv, tanks and trucks rolling into the centre of Kherson, and strikes in Mariupol and Zhytomyr 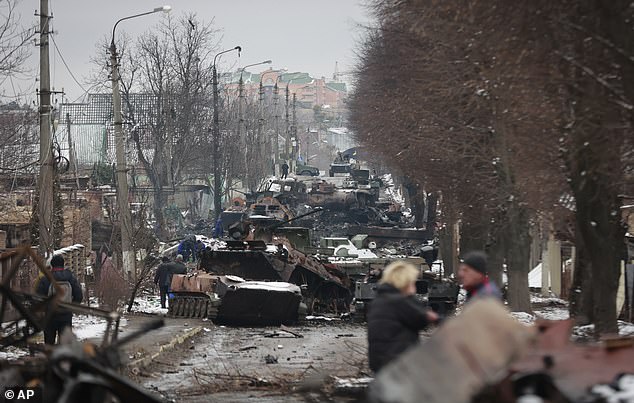 The remains of a destroyed Russian military convoy are seen on a street in Bucha, to the south of Kyiv, on Wednesday morning 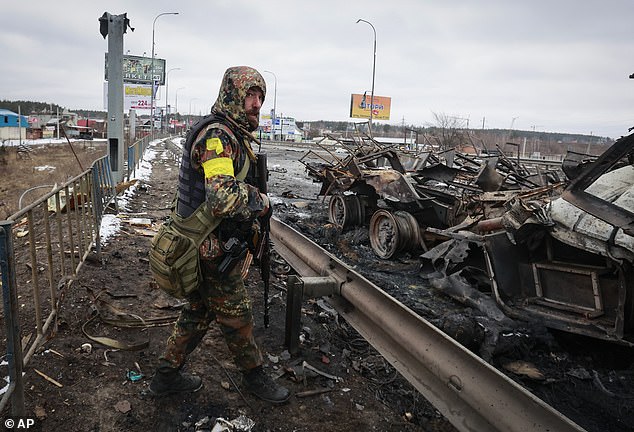 An armed man stands by the remains of a Russian military vehicle in Bucha, close to the capital Kyiv, Ukraine 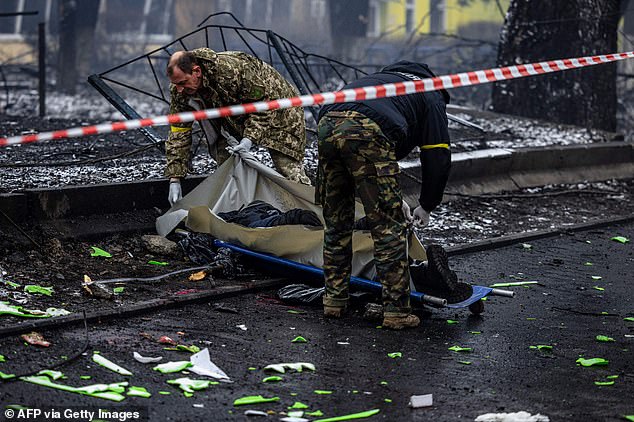 Klitschko said that fighting is still ongoing in the cities of Bucha and Hostomel, on the outskirts of Kyiv, where a large number of destroyed Russian vehicles were pictured on Wednesday. He implored people in the city ‘not to lose endurance’, saying all critical infrastructure is still running and humanitarian supplies are being handed out.

‘I ask everyone, for security reasons, not to go outside unnecessarily. At the alarm – go to the shelters,’ he said. ‘The enemy is gathering forces closer to the capital… We are preparing and will defend Kyiv!’

Images showed areas of the city damaged in overnight strikes, as attacks resumed on Ukrainian cities elsewhere in the country – with paratroopers dropping into Kharkiv on Wednesday morning as missiles struck a university in the city having apparently missed a nearby police headquarters.