A new portrait of The Queen with two of her beloved fell ponied has been released to mark her 96th birthday,  as she quietly celebrates the landmark occasion in Sandringham.

Taken in the grounds of Windsor Castle last month, the glorious photograph shows the monarch standing with two of her own favourite fell ponies, Bybeck Nightingale and Bybeck Katie, in front of a huge magnolia tree in full bloom of early spring.

The image has been released by the Royal Windsor Horse Show, which the Queen has attended every year since 1943 and was taken by Henry Dallal, who was commissioned to take an official portrait of her to mark her 90th birthday.

The monarch, who turns 96 Thursday, travelled to Wood Farm on the Sandringham Estate in Norfolk today, where Prince Philip spent his retirement before his death aged 99 last year.

A new portrait of The Queen with two of her beloved fell ponied has been released to mark her 96th birthday, as she quietly celebrates the landmark occasion in Sandringham 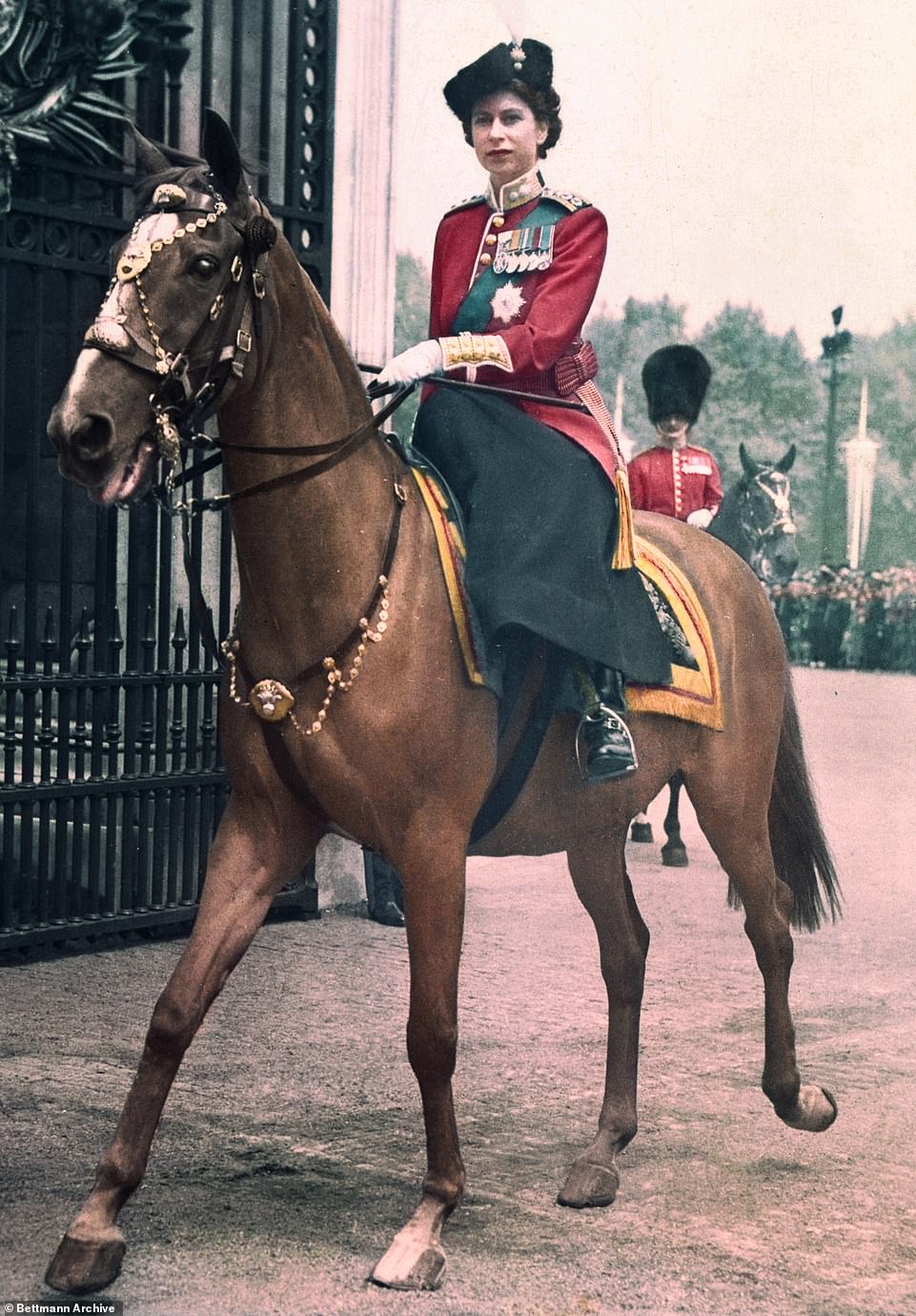 The Queen, then still known as Princess Elizabeth, was an expert on all thing equine. Pictured representing the King at Trooping the Colour in 1951

This year the Royal Windsor Horse Show will mark the Platinum Jubilee with A Gallop through History, a spectacular equestrian display showcasing horses from across the globe.

It has been billed as a ‘personal tribute to our monarchy’ and will feature more than 500 horses and more than a thousand performers taking the audience on a journey from Elizabeth I to the Queen.

On the Queen’s left is the pony Bybeck Nightingale and on her right is Bybeck Katie in the new image, and both animals will feature in A Gallop through History.

Her love for the equine world is something she shared with her mother, and she has been breeding and racing horses for more than 60 years.

Thoroughbreds owned by the Queen have won four out of the five flat racing classics – the 1,000 Guineas and 2,000 Guineas, the Oaks and the St Leger – with only the Derby eluding her.

Derby day this year will see the Queen and her family in the royal box at the Epsom Downs Racecourse as part of her Platinum Jubilee celebrations, with three of her horses in contention to be picked for the international event. 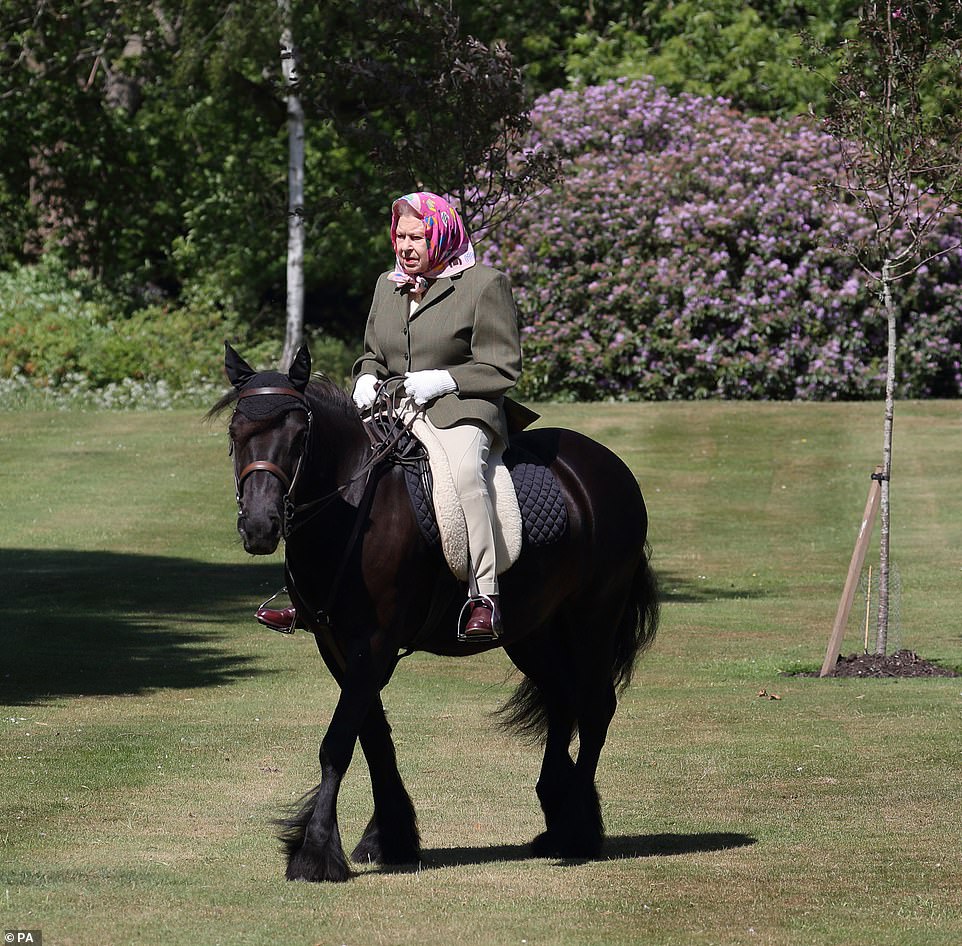 The monarch, who turns 96 Thursday, travelled to Wood Farm on the Sandringham Estate in Norfolk today, where Prince Philip spent his retirement before his death aged 99 last year. She is pictured rising in 2020 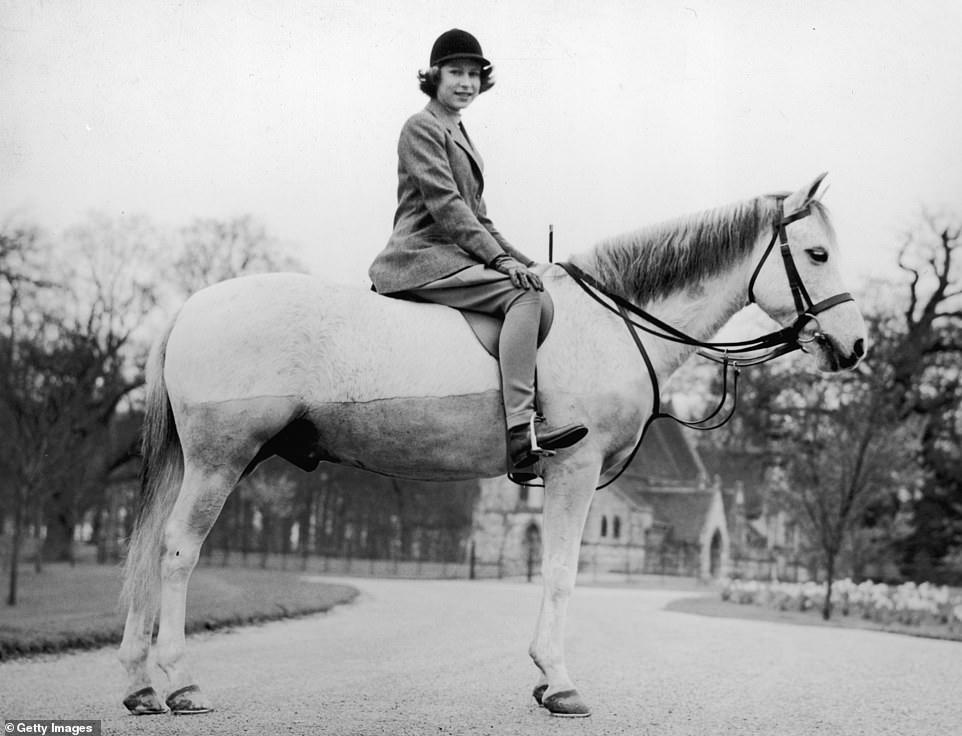 Princess Elizabeth out riding at the Royal Lodge, Windsor in April 1940 – Her Majesty has long been a fan of horse riding

Her horse Dunfermline, ridden by jockey Willie Carson, gave the Queen her most famous victory, triumphing in the Oaks and St Leger in her Silver Jubilee year, 1977.

In recent years the Queen made sporting history when she became the first reigning monarch to win Royal Ascot’s Gold Cup, with her thoroughbred Estimate in 2013.

Her Majesty  already received birthday wishes from Prime Minister Boris Johnson and Labour leader Sir Keir Starmer, and gun salutes will be fired in her honour on Thursday.

Although she has not been able to ride for several months due to mobility issues, he Queen has ridden horses since the age of three and is passionate about everything equestrian. 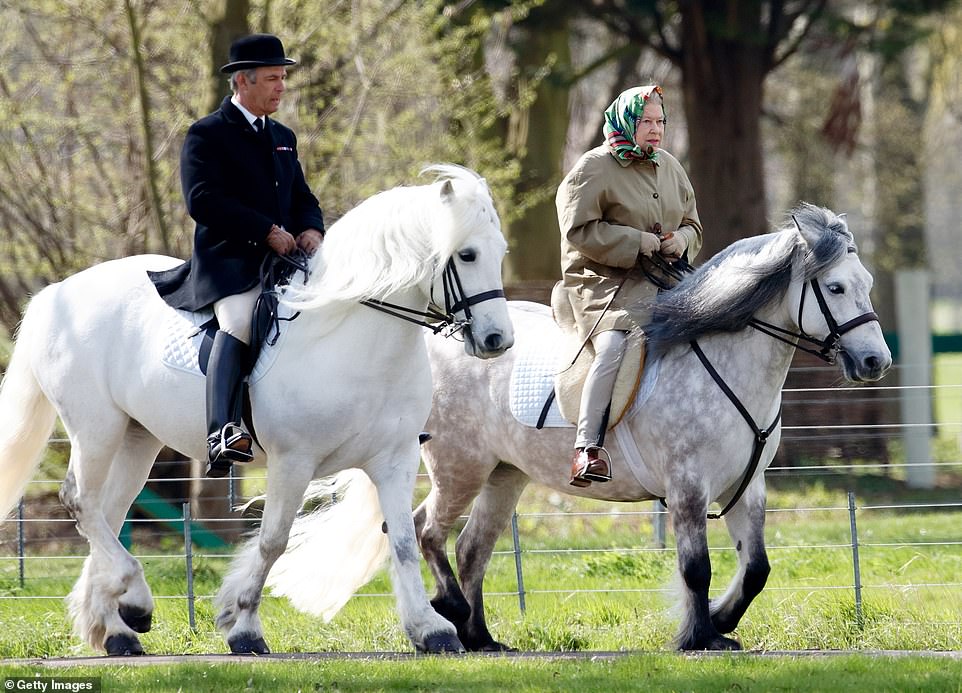 Elizabeth (accompanied by her Stud Groom Terry Pendry) seen horse riding in the grounds of Windsor Castle on April 17, 2006 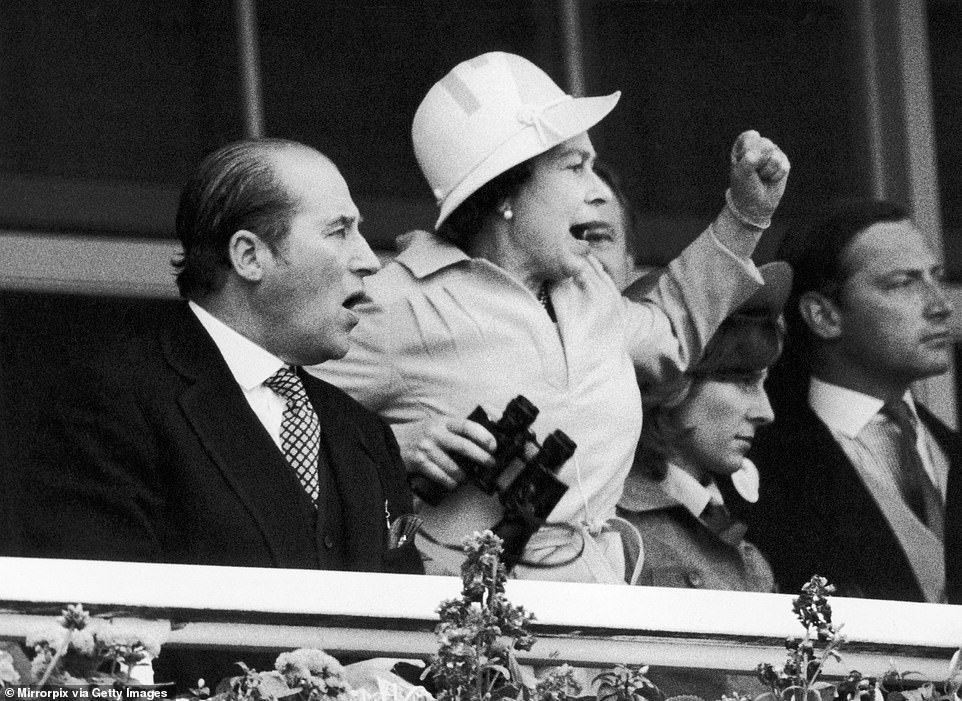 The Queen loved horses, and was especially fond of horse racing. She would showcase very candid reactions to wins and losses during racing event, like this time she was photographed cheering a horse on on June 8 1978

Royal aides have indicated she cannot yet commit to any of the events planned to mark her 70 historic years on the throne.

But it is understood that staff are ‘moving heaven and Earth’ to ensure she can attend the most prestigious race meet of the year – the Epsom Derby.

This includes changing the route of her official car so that it can pull up directly outside the Queen’s stand, leaving a short walk of a few yards to the lift straight up to her seat.

A source said the monarch ‘really is absolutely determined to attend’. The Derby on Saturday, June 4 is one of the official national celebrations over the four-day jubilee weekend and one that has a particular personal significance for the Queen. The race is the only one of the five ‘Classics’ she is yet to win, having finished second with Aureole in 1953 – just four days after her Coronation. 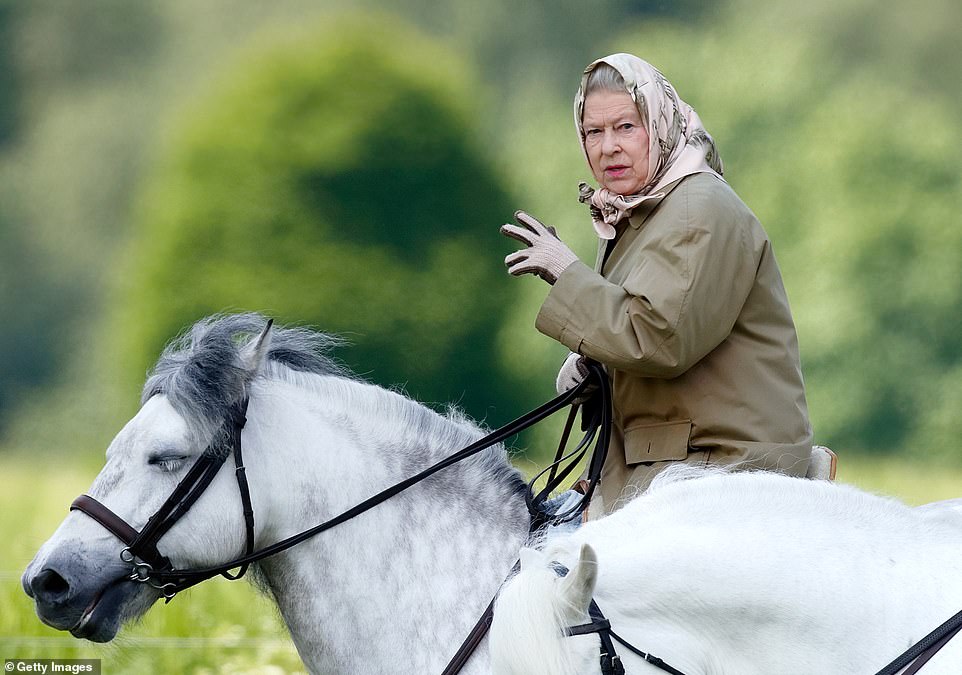 The Monarch kept on riding horses well into her 90s. Pictured Riding a grey and white horse on the grounds of Windsor Castle in June 2006, when she was 80

Legendary royal jockey Willie Carson, 79, said it would be a ‘fairytale’ for her to finally win the Derby. ‘You never know, him upstairs might just think it’s about time she had a Derby winner,’ he said at Epsom racecourse this week.

She will be greeted at the race meet by a guard of honour formed on the track by 40 jockeys who have ridden for Her Majesty.

The Monarch’s love for horses has been well-documented throughout her reign, whether it was breeding them, attending horse races or riding them around Windsor Castle.

In 2020, Vanity Fair reported that the Queen, then 94, was ‘riding everyday’ around Windsor Castle while isolating with the late Prince Philip during the Coronavirus crisis.

She also personally named the horses who draw her carriages, such as Cleveland Bays and Windsor Greys, who are used for official engagements such as audiences, royal processions and the state opening of Parliament.

The Queen’s birthday comes as her grandson Prince Harry said she’s ‘not looking forward’ to the milestone – in another interview with US television.

The Duke of Sussex, 37, spoke in glowing terms about the Monarch – following his ‘surprise’ visit to Windsor Castle last week.

When asked about the Queen’s upcoming birthday in his interview with NBC Today presenter Hoda Kotb, Prince Harry appeared to suggest that the Queen was ‘bored’ of the celebrations.

Speaking to the broadcaster, he said: ‘I think she’s — I think after a certain age you get bored of birthdays.

Ms Kotb replied: ‘You think she’s bored of her 96th?’ ‘I think so,’ responds Prince Harry. But the Duke then appeared to change tack when asked if the Queen will be ‘bored’ for her jubilee.

He replied: ‘No. I don’t think so. She’s had a few jubilees now and every one is slightly different. I’m sure she is looking forward to it.’