PARENTS have been urged to look out for the symptoms of a highly contagious disease spreading among kids.

Cases of scarlet fever are rising in England, but many could fail to spot the signs with the belief the bug no longer exists.

A dad was horrified when his child came down with what he thought was just an “old Victorian disease”.

Infections are centred in the North West of England, health chiefs confirmed, with classroom outbreaks reported in Salford and Wigan, Greater Manchester.

Symptoms include a distinctive rough and red rash, a sore throat, flushed cheeks and swollen tongue – and in most cases the condition causes a mild illness.

Dr Merav Kliner, Interim Regional Deputy Director – North West, from the UK Health Security Agency, said: “It’s not uncommon to see a rise in cases of scarlet fever at this time of year. 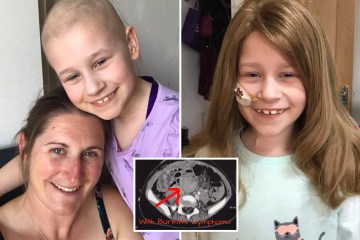 “We are continuing to monitor rates of infection across the North West.

“Scarlet fever is highly contagious but not usually serious and is easily treatable with antibiotics to reduce the risk of complications and spread to others.

“It is important to take antibiotics, as instructed by your GP, to minimise the risk of complications.

“The UKHSA reminds parents to be aware of the symptoms of scarlet fever and to call their GP or NHS 111 for further advice or assessment if they think their child might have it.

“To limit the spread of scarlet fever it is important to practice good hygiene by washing hands with warm water and soap, not sharing drinking glasses or utensils, and covering the nose and mouth when coughing or sneezing.”

It comes after a primary school in Manchester sent a letter to parents to warn them of the virus spreading in classrooms.

Manchester Evening News reported the letter from Bowker Vale Primary School read: “Dear families, we have been informed that a small number of children at Bowker Vale have been diagnosed with confirmed scarlet fever.

“Although scarlet fever is usually a mild illness, it should be treated with antibiotics to minimise the risk of complications and reduce the spread to others.”

The letter from Bowker Vale Primary School followed “a number of confirmed cases” in schools and nurseries across Wigan last week.

In the late 19th century, scarlet fever was a leading cause of death in children.

It has become both significantly rarer and less dangerous, due to medicine.

However, cases have been increasing in recent years.

Since 2014, a rise in numbers of cases has been seen with 15,000 to 30,000 cases currently diagnosed each year in England, Government stats show.

A dad, whose child goes to Bowker Vale, told Manchester Evening News that his little one came home “with no appetite” on Friday, March 11.

Speaking anonymously, he said: “I always thought it was quite an old, Victorian disease.

“My daughter started coughing, wouldn’t touch her food, and had to go for a sleep. We struggled to get her back up again. It was really unlike her.

“The next morning, she woke up with a rash all over her stomach and cheeks. We’d never seen anything like it.”

Shortly after, both dad and mum developed similar symptoms.

The couple called 111 for help. But it was only after receiving the letter from Bowker Vale did they realise the family was likely struck down with scarlet fever.

The worried parents then attended their GP and came away with antibiotics.

Scarlet fever can be a serious illness, but thanks to antibiotics, it’s less common than it used to be and easier to treat, the NHS says.

The bug is caused by the Streptococcus pyogenes or group A streptococci (GAS) bacteria.

Occasionally these bacteria can cause severe and life-threatening diseases.

Scarlet fever is, in the majority of cases, cleared with a 10-day antibiotic course.

But there is the risk it can develop into liver, heart, or kidney damage, meningitis, pneumonia and more.

The bug usually spreads in the winter and spring.

And although adults can get it, and show the same symptoms as children, some 90 per cent of cases are in children under the age of 10.

The first signs of scarlet fever can be similar to flu, including:

A rash of small, raised bumps appears 12 to 48 hours later, starting on the chest and tummy before spreading.

The rash makes the skin feel rough, like sandpaper.

On white skin the rash looks pink or red. It may be harder to see on brown and black skin, but you can still feel the roughness.

The rash does not reach the face, however the cheeks can look flushed.

The tongue develops a white coating which, as it peels, leaves the tongue swollen and red, known as strawberry tongue.

When to see the doctor

See a GP if you or your child:

Does Lettuce Water Really Help You Sleep? We Checked the Science