Always look on the bright side of life! Optimistic people live longer, healthier lives than pessimists because they have fewer stressful events to deal with, study reveals

By Shivali Best For Mailonline

While staying optimistic can be tricky during these uncertain times, it could actually help you to live longer, according to a new study.

Researchers from Boston University have found that optimistic people live longer, healthier lives than pessimists, and say it’s because they have fewer stressful events to deal with.

‘Stress is known to have a negative impact on our health,’ explained Dr Lewina Lee, who led the study.

‘By looking at whether optimistic people handle day-to-day stressors differently, our findings add to knowledge about how optimism may promote good health as people age.’

Researchers from Boston University have found that optimistic people live longer than pessimists, and say it’s because they have fewer stressful events to deal with (stock image)

Optimism could make you LAZY

Thinking too positively can prevent you from reaching your goals, by making you become lazy or complacent, one expert has said.

‘There is no doubt that a simplistic view of positive thinking…can be dangerous,’ Tim LeBon, a psychologist at City University London, told MailOnline.

‘There is plenty of evidence that fantasising about a positive future can lead to complacency.

‘You also set yourself up for feeling shocked and distressed when the future doesn’t turn out so good.

‘An oversimplistic recommendation to avoid thinking positively and to think negatively instead would be even worse,’ Mr LeBon told MailOnline.

‘We need to understand the power of both positive and negative thinking.’

Positive thinking is important because it helps drive motivation, and keeps us working towards the goals we hope to achieve.

But thinking negatively helps us get ready for failures or setbacks, so when bad things happen we are prepared to deal with them.

While previous research has found a link between optimism and healthy ageing, until now it’s been unclear how optimism impacts health.

In the new study, the team followed 233 older men over a 24 year period.

At the start of the study, which began in 1986, the men completed a questionnaire to assess their levels of optimism.

Then, from 2002-2010, the men were questioned again on up to three occasions about their daily stressors and mood on eight consecutive evenings.

They also reported having fewer stressors, which was unrelated to their higher positive mood, but explained their lower levels of negative mood.

In their study, published in The Journals of Gerontology: Series B, the researchers wrote: ‘Findings from a sample of older men suggest that optimism may be associated with more favorable emotional well-being in later life through differences in stressor exposure rather than emotional stress response.

While the study focused on older men, the researchers believe the findings are likely to apply to older women too.

‘Less is known about age differences in the role of optimism in health,’ Dr Lee added. 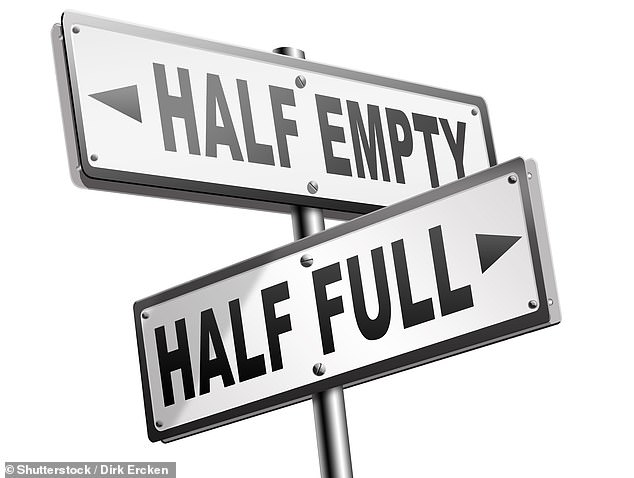 While previous research has found a link between optimism and healthy ageing, until now it’s been unclear how optimism impacts health

Unfortunately, the study comes shortly after research revealed that optimism isn’t as ingrained in human nature as previously thought.

Researchers from the University of Bath found that humans aren’t predisposed to optimism, nor do we go around with ‘a pair of rose-tinted glasses’ – a belief that may have biased the findings of previous studies.

The experts cast doubt over past research supporting the existence of ‘irrational optimism bias’ – that humans innately have a feeling that everything will be alright.

ARE YOU A DEFENSIVE PESSIMIST? TAKE THE QUIZ TO FIND OUT

Defensive pessimism is a strategy used by anxious people to help them manage their anxiety so they can work productively.

They lower their expectations to help them prepare themselves for the worst, then they imagines all the bad things that might happen.

This can help anxious people focus away from their emotions so that they can plan and act effectively.

By contrast, strategic optimism is typically used by people who aren’t anxious. People using this strategy set high expectations, and then actively avoid thinking much about what might happen.

Both of these strategies do quite well, but both are also vulnerable to situations that don’t accommodate their strategies.

If defensive pessimists try to raise their expectations, or avoid playing through a worse-case scenario, their anxiety increases and their performance suffers.

And if strategic optimists set lower expectations or play through the worst possible outcomes, their anxiety increases and performance decreases.

People can use different strategies in different situations, and not everyone is either a defensive pessimist or a strategic optimist.