I lay on my bedroom carpet looking at the blue of the ceiling, feeling like I was in a teen movie. My phone buzzed and I picked it up to respond to my crush’s last text – except this time it wasn’t a text, but a voice note, a short audio file you send via Facebook, Instagram or WhatsApp. It was the first time I’d heard his voice – it was flat, low and attractive. He asked me how my day had gone. My stomach fluttered because I knew this meant he wanted to get closer to me, yet I also freaked out because there was so much pressure to get my response right.

At first, I ignored the switch in communication and started typing out a message, because I hate my voice – the way I can hear my nerves prickle through my speech, the high pitch of my intonation and the number of times I say “like”. But don’t voice notes feel so much more intimate? Hearing the subtleties of the other person’s speech, as if they were whispering in your ear – and I wanted to get closer to him. So I focused on getting comfy, and pushed the record button. In response to his “How was your day?” I started telling him about the bike I had just got. “It hurts so much on your vulva. I only lasted about 10 minutes before I limped off.”

His response was awkward. “Yeah … I can’t say much about, er, women’s engineering down there … The seats are probably built for a male anatomy…”

“Wow, say that again,” I replied in another voice note, in a mock sultry voice.

I recorded another note. “I didn’t actually think you were being sexual then,” I began, a slight breathlessness hanging off each word. “I was joking cos you sounded so formal, you know?”

On and on I went; it was excruciating. I should have deleted the recording but I was so panicked I forgot I could do that. I imagined him raising his eyebrows on the other end of the line. Playing my note back to his friends. Laughing at me. In a last-ditch attempt to salvage the unsalvageable, I changed the subject: “Do you like Drake’s new album?” It was clumsy, obvious, and from then on he ignored me.

This recent encounter will forever remind me why I’m better off texting (like most twentysomething Gen Zs, I hate phone calls, with their awkward silences and long, drawn-out endings: “Yep, speak soon, good to chat, bye, love you, yeah bye, bye, bye …”). But, whether I use voice notes or not, among my peers they are becoming ever harder to avoid.

When WhatsApp introduced them in 2013, receiving a voice note felt like a novelty – something more human in a sea of emojis and abbreviations – now, around 200 million are sent every month. Instead of a simple “I’ll meet you outside the station” text, friends now send long rambles about how they were going to catch such and such train, but then they realised the bus would drop them outside, and while they were on the bus they thought about this idea for a novel … It’s like having to sit through an unedited podcast.

Twitter has introduced a voice note feature, as have dating apps Hinge, Bumble and Happn. Last month, dating website String launched with the tag line “Date with your voice”. In 2018, American singer Charlie Puth felt passionate enough about voice notes to name an album after them; and on her latest release, 30, Adele took this tribute a step further by including voice notes from her son, Angelo, in the track My Little Love.

Yet for something seemingly so inoffensive, voice notes are incredibly divisive. One friend calls them “the worst thing to happen to communication since the ‘seen’ receipt on messenger”. Another, who pushes a pram, says they’re indispensable. They are beloved of younger generations, but older family members seem to find them baffling. Social media comments range from mundane observations like the Twitter user who got 142.6 likes for pointing out how often she ends a voice note with “so yeah”, to more impassioned rants on voice note etiquette.

For voice note fan, model and digital editor Maddy Reid, 23, who sends 10 to 50 a day over WhatsApp, much of their appeal lies in how efficient they are to send, particularly when you’re on the move. “It’s like a phone call, except you don’t have to rely on both parties being free at the same time.

Text messages don’t convey emotional nuance in the same way a voice note can, Maddy says. “If you’re broaching a sensitive topic, a lot can get lost in translation over text. That’s why if I’m cancelling a date or telling a friend something tricky, or anything else that could be misconstrued, I will almost always do it via voice note so the other person can hear how I’m actually feeling.”

Reid is right to think voice is a more reliable way to express oneself than text. Silke Paulmann of Essex University’s psychology department, says: “Vocal cues alone can communicate our internal state (emotions, attitudes, motivations) without the need for additional words.” When we hear people talk, she says, any “discrepancies”, such as someone who insists they’re fine but doesn’t really sound fine, “can be picked up within a couple of milliseconds” forcing the listener to “re-evaluate” the message.

So, if cancelling a date via voice note, the other person would be able to decipher from the tone whether the speaker really is busy or losing interest. Whereas with a “something’s come up” text, it is harder to work out the sender’s true feelings, especially if it includes kisses, emojis and multiple characters (“I’m soooo sorry”) to warm up the mood of the message.

This is less of an issue with older generations, who tend to interpret text messages at face value. If someone replies “OK”, they assume it means they’re actually OK. Whereas a person my age (I’m 26) is more likely to think the brevity of the response means the sender is annoyed. Voice notes bypass the slightly exhausting code of texting etiquette that can make it a minefield.

Of course, voice notes are not just a text substitute; increasingly people use them instead of the traditional phone call. They give you authority, says Paulmann: “In a normal conversation, you might have little control over how often you get your voice heard. The other person could talk on at you for minutes and unless you felt comfortable interrupting, you’d end up just listening. Real conversations are more fluid and prone to changes – if the other person shows no interest in what you’re saying, for example – but voice notes protect you from that.” This may explain why the majority of people who send me voice notes are women: it gives them an avenue to speak in the same way men do, without fear of being cut off or dismissed.

But not everyone likes having that much power over an interaction. According to Bernie Hogan, a senior research fellow at the Oxford Internet Institute, it is this one-sidedness, without important social cues, that makes voice notes a challenge for some people. “During phone calls we modify our tone and the content of our conversation according to the feedback we get from the people we’re talking to,” he says. “In the absence of that feedback, we must work hard to think about the person on the other end of the phone. For some people, that comes very easily, others don’t care, but a third group get very self-conscious about having to ad-lib on the spot.”

I get immensely self-conscious ad-libbing on the spot. But I still prefer phone calls to voice notes, because at least the other person can chime in with experiences that resonate with what I’m saying: I like being able to hear them mmming in a way that expresses sympathy. I feel totally at sea without these cues and begin to doubt the content of what I’m talking about. Do they want me to wrap up the story, or does it need more detail to be interesting? It’s what happened when I was sending voice notes to that guy I liked. I worry I’m making the other person listen to something that they would rather avoid.

“It makes me paranoid that I’m wasting someone’s time,” agrees voice note sceptic Issey Gladston, photographer, 23. She likens the feeling of sending a voice note to making a point in a university seminar. “I just want to get out what I’m saying as quickly as possible, but then there are these other people, usually men, who go on these long tangents for five minutes which don’t have anything to do with the question because they feel they have the space to do it. I don’t feel I have the space.”

There’s something quite self-indulgent about thinking people care to listen to you talking for a long time – indeed, any length of time – without interruption. You don’t know where that other person is, they might have to put earphones in to listen, and when they finally get sorted, you might just be saying: “Oh sorry, one sec, just in the shop … yeah, Rizlas please … the blue ones.”

Voice-note devotee Reid reassures me that “it’s not about loving the sound of my own voice”, and uses the fact that she doesn’t listen back to them as proof of this. But if she doesn’t want to listen to her own notes, isn’t that proof of something else? That no one likes listening to voice notes in the first place?

I normally hate the sound of my own voice, though this often changes when alcohol is involved. Recently I came back from a night out and was lying on my bed, trying and failing to persuade myself to stop scrolling on my phone and take my makeup off before I passed out. Somewhere between the prosecco haze and the inability to use my fingers properly I started sending voice notes. One to my friend about the guy at the gym who seems to treat the place like a social club; another to my mum about what I want for my birthday; then another three to people I barely speak to anymore. I told Gladston about this experience and she confessed to sending out drunken voice notes too. “The other night I sent about seven to all my friends and in the morning I unsent all the ones which hadn’t been played yet because I couldn’t bear people listening to them.” If I like sending voice notes when I’m drunk – when I’m feeling more self-assured – perhaps it’s not the voice note I have a problem with, but my own confidence in what I have to say.

Either way, I need to learn to love voice notes because ever more variations of them are being developed. Hogan thinks the next big thing will be features that allow us to sound like someone else, say, Bugs Bunny or Britney Spears, “like a filter but on sound rather than image”.

Reid says her main reason for using voice notes is “fostering closeness with people I don’t get to see”. With a fake voice you’d no longer hear the ripple of nerves as they talked about a job interview or the high-pitched squeal as they recalled a great date. It wouldn’t be a voice note at all, would it? In that case, I’d probably send one: clumsy flirting as told by Britney might just work. 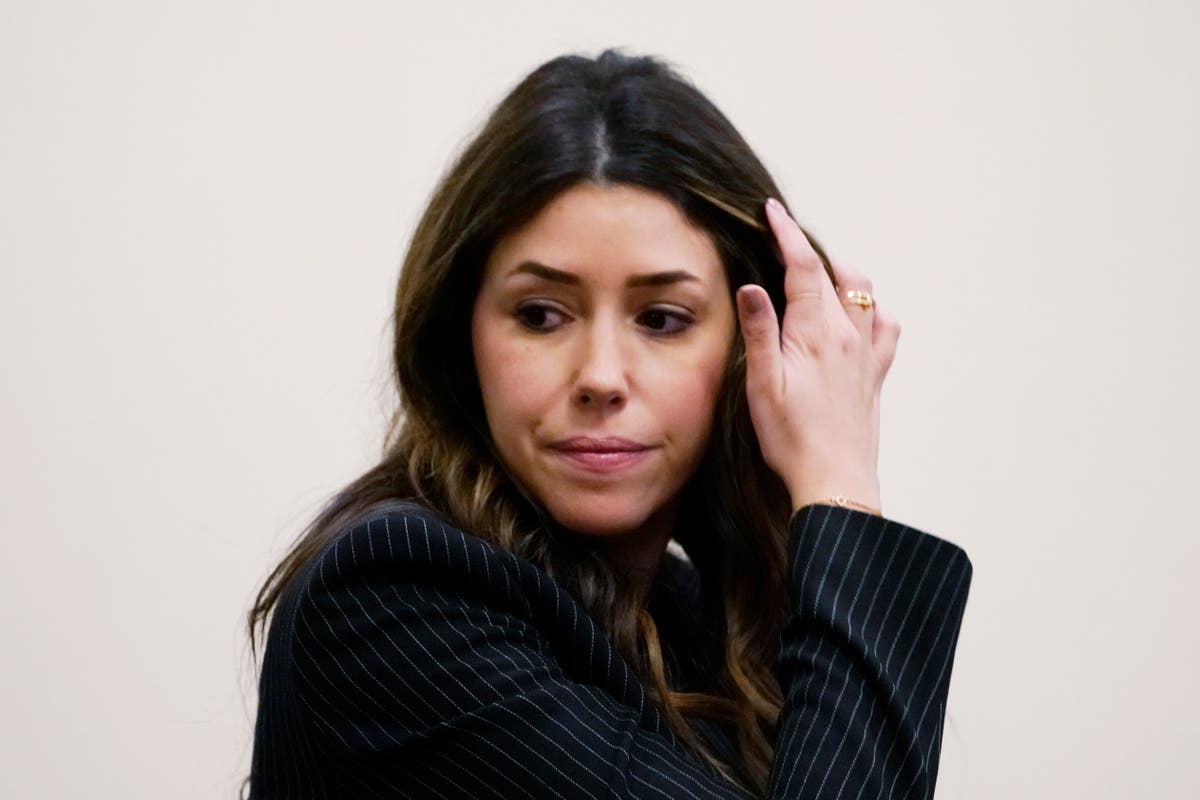 Camille Vasquez – who is Depp’s hotshot attorney and why is she trending on TikTok?