Emmanuel Macron is hoping to win a second five-year term in the second and final round of the French presidential election today. His opponent is again Marine Le Pen, leader of the right-wing populist party National Rally, whom he trounced by 66.10 per cent to 33.90 per cent in 2017.

Macron’s lead over Le Pen, 53, in the opinion polls has been growing.

But to secure victory he must win over a substantial number of those who backed other candidates, both on the left and the centre-right, and persuade them to turn out and cast their votes for him.

Le Pen cast her vote in Hénin-Beaumont, her political base in northeast France where she is the local MP. Macron, 44, voted with his wife, Brigitte, in Le Touquet.

Turnout figures showed a 63.23 per cent participation rate by 3pm UK time, according to the interior ministry, below the 65.30 per cent recorded at the same time in the 2017 election. The figures confirmed a trend forecast by pollsters who said this year’s final vote would see the highest abstention rate in more than 50 years.

How Le Pen has softened her image

Since losing to Emmanuel Macron in the last election in 2017, Marine Le Pen has worked hard to soften her image (Peter Conradi writes). These days, she smiles a lot and makes much of her life as a single mother. It seems at odds with her position as head of a party routinely characterised as far right.

This change of style goes hand in hand with her long-standing goal of “detoxifying” the party that she took over from her father, Jean-Marie. While her father, a former paratrooper, was notorious for dismissing Nazi gas chambers as a “detail of history”, Marine Le Pen has centred her campaign on the cost-of-living crisis and France’s domination by urban elites. The party, originally known as the National Front, has been renamed the much more inclusive-sounding National Rally.

Marine Le Pen with her father, Jean-Marie, who was head of the National Front for almost 40 years, at a rally in Paris in 2013

Le Pen’s attempt to rebrand herself as a mainstream politician was helped by the emergence last autumn to her right of Éric Zemmour, a radical polemicist with even harder-line views on immigration and Islam. He was eliminated after doing badly in the first round a fortnight ago, but was in the race long enough to make her seem moderate in comparison.

But don’t be fooled: Le Pen is no liberal. In recent days she has spoken of plans to ban the wearing of Muslim headscarves in all public places — a policy Macron has warned could lead to civil war. Her policy of priorité nationale, which she wants enshrined in the constitution, would reduce the rights of non-French people living in France — and put her on a collision course with the EU.

A Le Pen win would be a gift for Putin

President Putin is one world leader who would probably be pleased by a Marine Le Pen victory (Tom Parfitt writes).

Any European politician who disrupts EU unity is good news for Moscow, wherever they sit on the political spectrum.

Putin pointedly welcomed Le Pen to the Kremlin in March 2017, a month before the previous French presidential election, in which she also ran.

The two leaders gave each other a boost at that meeting, with Le Pen saying she shared with Putin “a vision of co-operation and not one of subservience”. The French candidate promised she would opt out of “foolish” EU sanctions on Russia if she won. 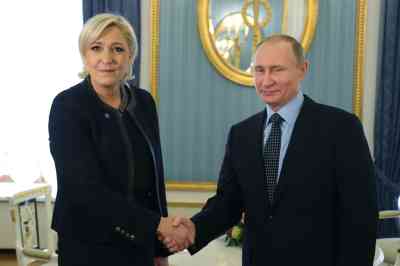 Marine Le Pen met President Putin in 2017 at the Kremlin, where she said she had a vision of France co-operating with Russia

Le Pen’s ties to Moscow had already become apparent after her party took a €9 million loan from a Russian-based bank in 2014.

However, the National Rally candidate has condemned Russia’s invasion of Ukraine, and Moscow has tempered its hopes for an ally in the heart of Europe.

Russian analysts think Le Pen’s previous sympathy for Putin tainted her amid western fury over the war, and in case of victory she will be restricted in pushing any policy that truly favours the Kremlin.

If Le Pen wins and the Ukraine war eventually dies down, “the best that can be hoped for is a stabilising of relations at a low level, which would already be a plus compared to how things are now”, one Moscow expert said.

Divided France: the gulf between city elites and provincial towns

Voters in Paris and in other big cities often have a positive image of President Macron (Adam Sage writes). They tend to laud him for modernising an economy long hindered by red tape, conducting himself with aplomb on the international scene and handling the health crisis with skill.

But in small provincial French towns, the view is very different. The reforms Macron introduced in an effort to encourage work rather than welfare — such as the abolition of wealth tax, a reduction in corporate taxes and a cut in housing benefit — have left him with a reputation as the “president of the rich”.

It is a reputation that has caused him to be not just disliked but loathed across swathes of north, central and eastern France, and in parts of the west and the Mediterranean coast too. 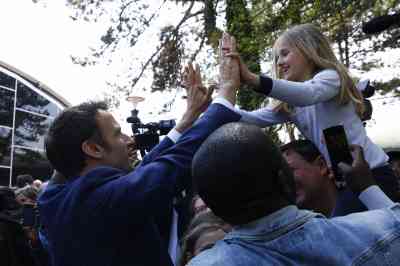 Macron was greeted by well-wishers after voting in Le Touquet today, but he is loathed across swathes of provincial France

If he generates such anger, it is not only because of his policy choices. His attitude, too, goes down badly among provincial working-class voters aghast at his tendency to waver between high-flown rhetoric and sometimes coarse language, such as when he said he wanted to “emmerder [piss off]” the non-vaccinated. Critics often depict him as disrespectful and haughty.

The anger exploded in the autumn of 2018 during the yellow-vest movement driven by provincials exasperated at the rise in the cost of living and what they perceived as the growing inequality between rich and poor under Macron’s presidency.

Macron spent much of the next three years trying to bridge the gulf between the Parisian elite and the small provincial towns that were the yellow-vest bastions.

He never quite succeeded.

Marine Le Pen, 53, was born in the chic Parisian suburb of Neuilly-sur-Seine and grew up in the family mansion in nearby Saint-Cloud. She has been married twice and has three children, but now shares a flat with her best friend and six female cats, saying she does not want males of any species in her household.

She has a law degree but also a cat-breeding diploma and has done little to end rumours that she will quit politics to become a full-time breeder if she fails to become president. 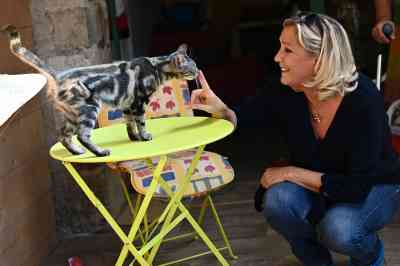 Having become leader of the National Rally in 2012 on the retirement of Jean-Marie Le Pen, her father and the party’s founder, she subsequently fell out with him over her attempt to make the movement less extremist and more electable.

She achieved the best ever score for a National Rally candidate that year and improved on it five years later, but lost to Macron after performing poorly in their televised debate. This year’s election is widely viewed as her last chance.

Emmanuel Macron, 44, was born in Amiens, northeast France, and is married to Brigitte, 68, a French teacher whom he met while a pupil at the school where she worked. She has three children from her previous marriage but none with him.

After graduating from the École Nationale d’Administration, France’s most prestigious higher education establishment, he worked as a civil servant and as an investment banker until 2012 when he became an adviser, and then the economy minister, of François Hollande, the Socialist president.

He resigned from the cabinet in 2016 to launch his own centrist political movement, La République En Marche. 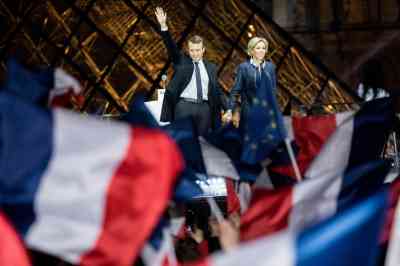 Despite never having stood in an election before, he ran to become president in 2017, winning after a campaign overshadowed by sleaze allegations against François Fillon, the centre-right favourite.

Macron took office on a reformist agenda, promising to borrow ideas from left and right. In practice, he has leant to the centre-right during a five-year term marked by his unflinching commitment to the EU, but also by violent protests and the pandemic.

What would a Le Pen victory mean for France and Europe?

A victory for Le Pen would mean a significant change of direction for France, and for Europe (Peter Conradi writes). The leader of the National Rally has fought a campaign based on lowering taxes to boost living standards and, more controversially, on introducing priorité nationale: a change to the constitution that would reduce the rights of non-French people living in France. This could face legal challenges at home and embroil her in a battle with Brussels, over time making it difficult for France to remain a member of the EU (even though Le Pen has said she is opposed to Frexit). She has also vowed to ban the wearing of Muslim head scarves in public. A victory for Macron would mean a continuation of his centrist policies

How significant are the early turnout figures?

The interior ministry said that 26.4 per cent of the country’s 48.7 million registered voters had cast their ballots by midday. Five years ago, the figure at the same time was 28.23 per cent. The final turnout in 2017 was 74.6 per cent, which was considered poor by French standards. There is concern among commentators that it could be even lower this year. A low number could be bad for Macron because it might mean the left-leaning voters he has tried to woo have stayed at home rather than turned out for him.

The midday turnout was nevertheless slightly higher than for the first round of the election two weeks ago. It is unclear whether this signals a marginally higher level of interest in the second round, or simply a desire to get voting out of the way early before heading off on holiday. The second round is being held during the school holidays, causing speculation that some voters may skip the ballot box in favour of a trip to the country or to the seaside.

Throughout the campaign, Macron has consistently been ahead of Le Pen in the polls with his lead widening in recent days. On Friday an Opinionway poll predicted that Macron would win re-election with 57 per cent of the vote.

In the first round Macron came out on top out of the 12 candidates in the vote, which was held on April 10. He won 27.85 per cent, followed by Le Pen on 23.15 per cent. The National Rally leader was only narrowly ahead of Jean-Luc Mélenchon of the far-left France Unbowed party, who took 21.95 per cent. The big question since then has been how Mélenchon’s 7.7 million voters will behave today: will they back Macron or Le Pen, spoil their ballot papers or abstain?

Welcome to The Times’s live coverage of the French presidential election, with Emmanuel Macron facing off against Marine Le Pen. Result projections will be released at 7pm BST, which tend to be highly accurate and should tell us who has won and by how much. The results for each region will start to come in soon after, and we should get a definitive result later this evening.

• Ayesha Hazarika in London and Peter Conradi in Paris will be on Times Radio between 7pm and 8pm. Listen here