Among the glitz and the glamour of the BAFTA red carpet there were also some major fashion misses – as these seriously questionable ensembles prove.

Reality TV star Millie Mackintosh, Charlotte Carroll and RuPaul’s Drag Race star Bimini Bon Boulash were among those who missed the mark in outfits that failed to flatter their fabulous figures.

Actresses Millie Bobby Brown and Florence Pugh played with proportions and layering but the confused results show that sometimes less really is more. 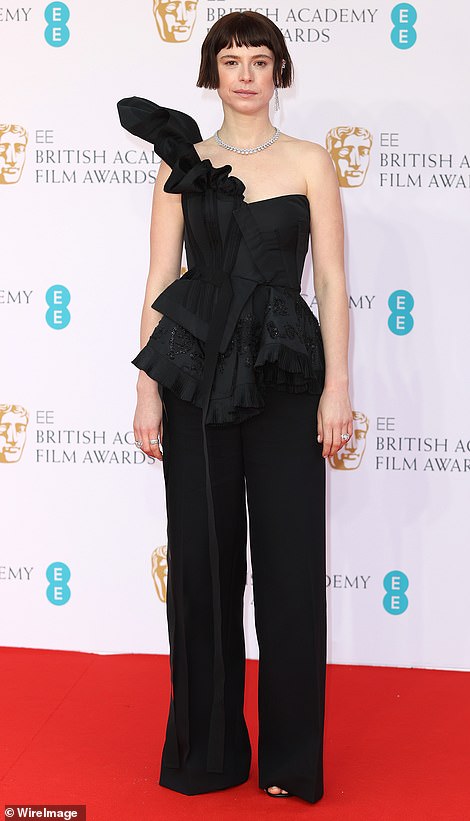 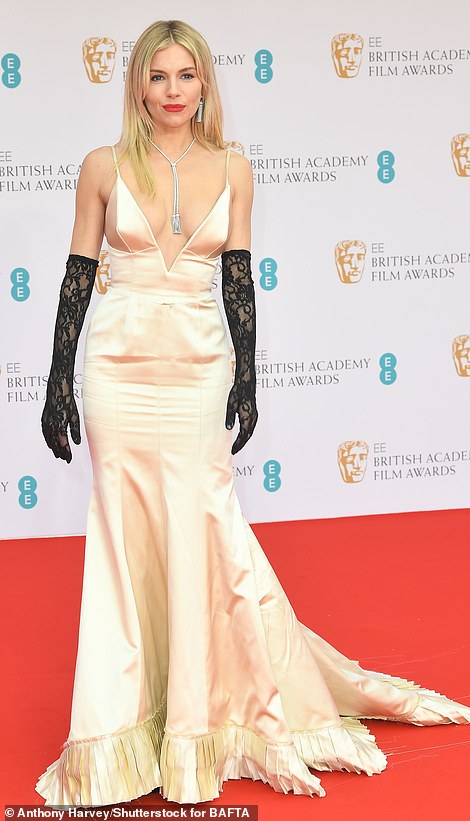 Made In Chelsea’s Millie Mackintosh showed her support for Ukraine with a blue and yellow ribbon at the event. But it failed to distracted from her creased pink evening gown.

The pale colour was not the most flattering on her skin tone, while the combination of a single puff sleeve and oversized bow at the back meant it was difficult to know where to look.

Indeed the oversized bow was a major fashion trend on the red carpet. Director Charlotte Carroll sported a large, floppy bow across the front of her bold pink and yellow gown, while Florence Pugh’s vibrant pink creation on the back of her black mini dressed provided a point of contrast, although viewers were divided on the overall effect.

Risk-taker Bimini Bon Boulash stood out in an intricate white lace creation which they styled with white tights and white strappy shoes. It was the blue medical-inspired opera gloves that seemed to throw off the look.

Equally divisive was perennial It Girl Sienna Miller who paired her plunging gold gown with a pair of black lace opera gloves. Her strappy gold frock featured feathered strips of fabric along the bottom that were reminiscent of a curtain trim.

The rock chick ensemble was certainly eye-catching but it seems the rising star is still finding her fashion voice. 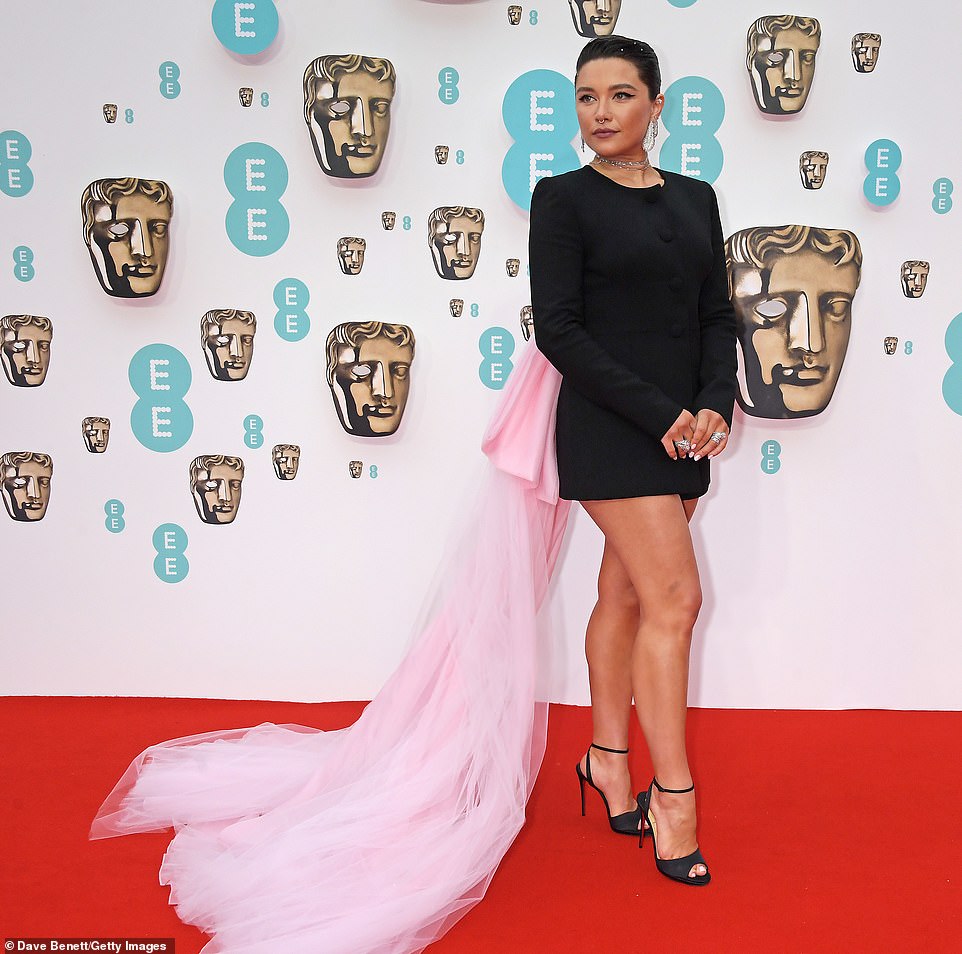 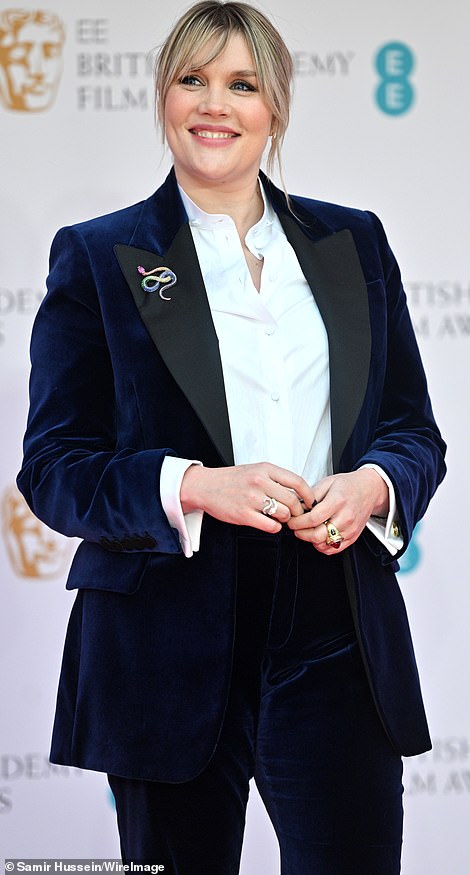 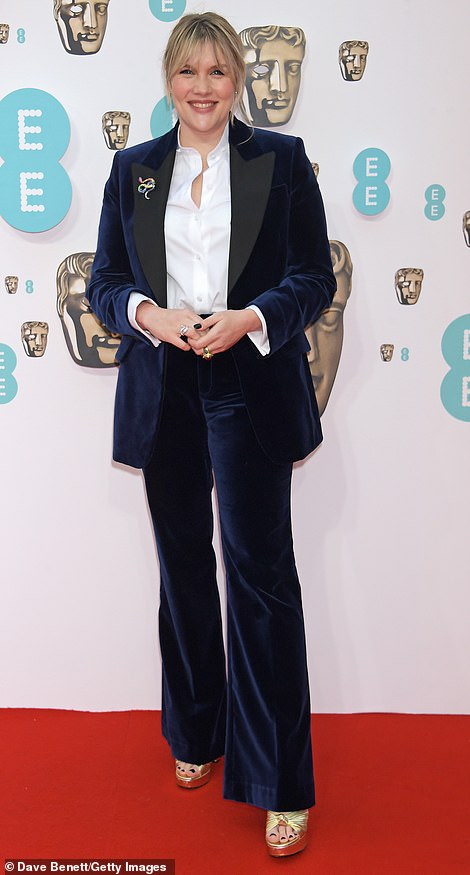 Standing out from the crowd: The Crown’s Emerald Fennell sported a navy blue tuxedo. But not everyone was a fan

Stars were reportedly advised to dress ‘respectfully’, amid fears attention-grabbing dresses and suits would appear distasteful in light of the Ukraine conflict.

A number of celebrities, including Naomi Campbell, Daisy Ridley and Best Actress winner Joanna Scanlan, sported black ensembles, which could be interpreted as a nod to this style decree.

The Power Of The Dog won top honours at the Bafta film awards, where sci-fi blockbuster Dune also collected a string of gongs.

Will Smith and Joanna Scanlan were named winners of the top acting prizes, while No Time To Die actress Lashana Lynch was crowned EE rising star. 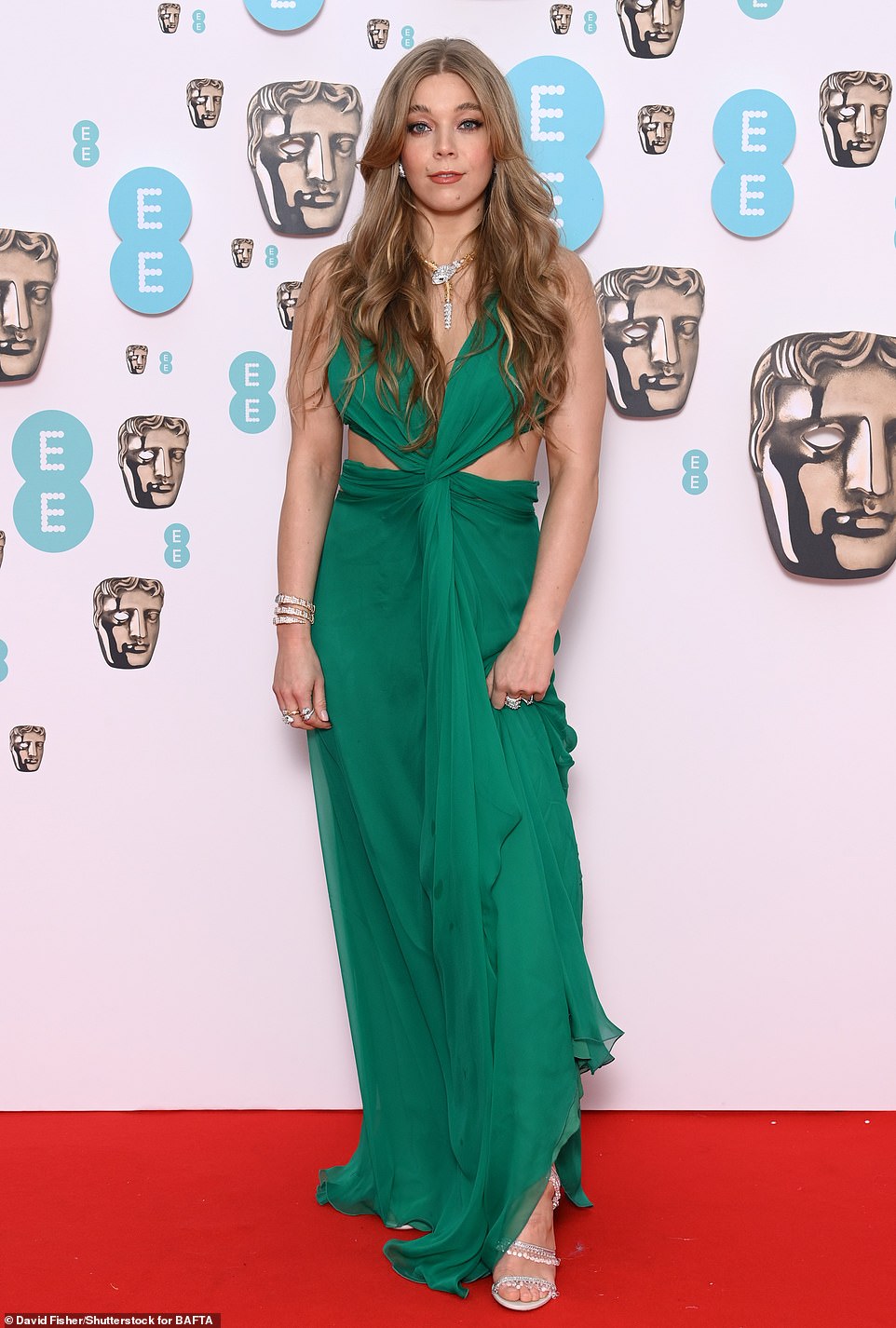 Noughties inspired: Musician Becky Hill walked the red carpet in a flowing green gown that seemed like a 00’s throwback 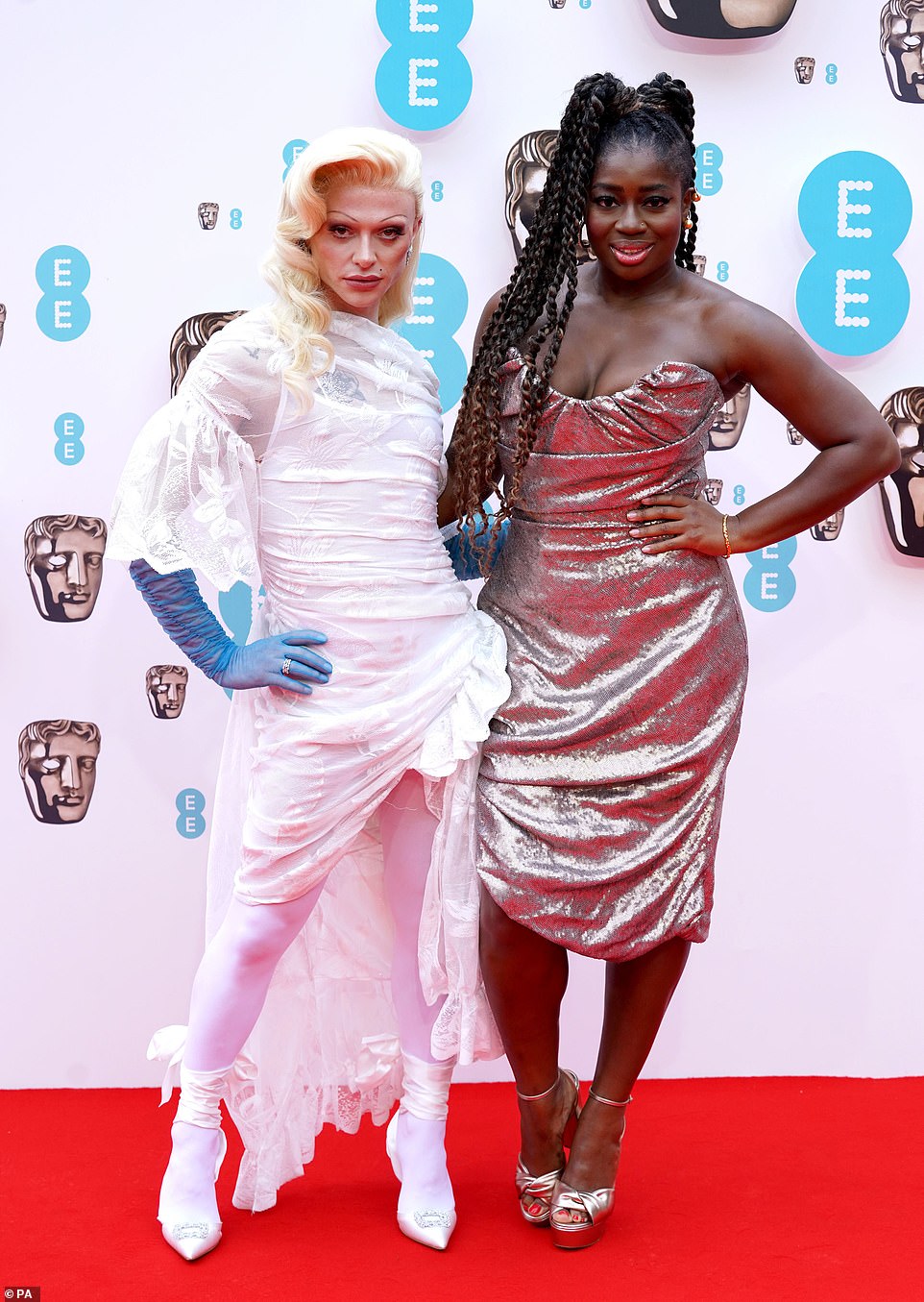 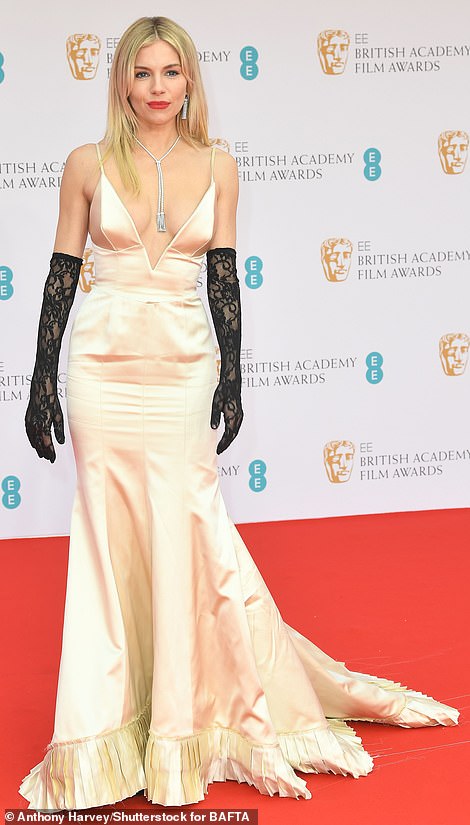 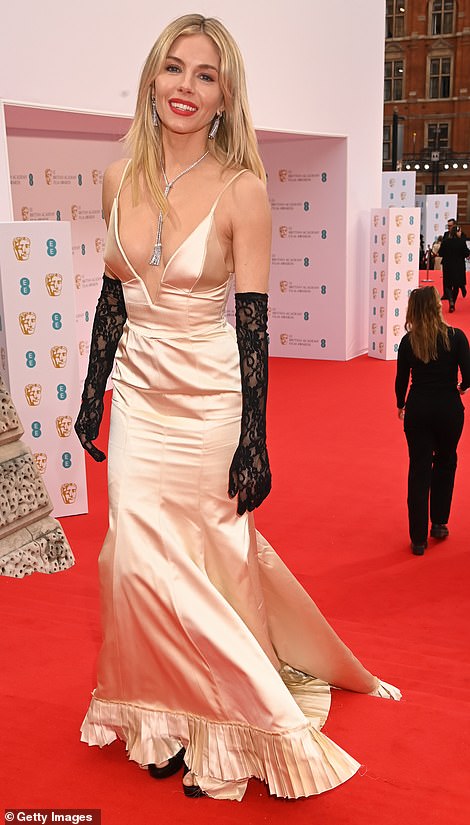 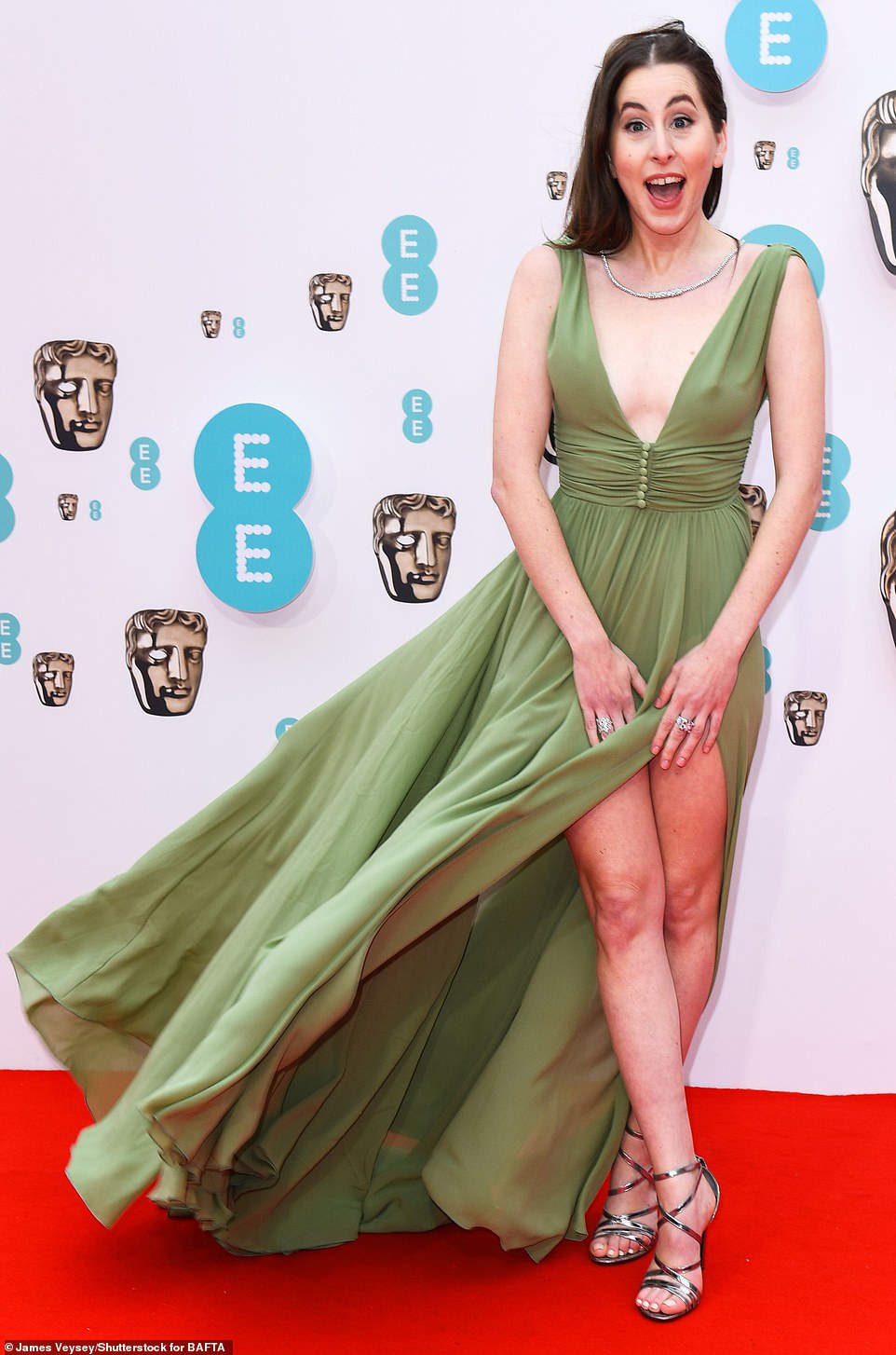 Careful! Alana Haim, 30, held down her plunging green gown to protect her modesty as the slit blew open

The star-studded ceremony at the Royal Albert Hall was hosted by Pitch Perfect actress Rebel Wilson, who made risque jokes about the Duke of York, the Duke and Duchess of Sussex, the gender pay gap, her flop film Cats and her recent weight loss.

The Power Of The Dog, Jane Campion’s brooding western, was named best film at the ceremony, while Campion won best director.

Finding her voice: There was a lot going on with Millie Bobby Brown’s black BAFTA look… but not all of it was good

She was absent from the proceedings, with the best film prize collected by producer Tanya Seghatchian, who said: ‘Our only regret is the great Jane cannot be standing here.

‘Jane, we are all standing on your shoulders tonight, you are a visionary whose trail has blazed through the last 30 years of cinema.’

Smith, who also missed the ceremony, was lauded for his role as Richard Williams, the father of tennis superstars Venus and Serena Williams, in King Richard, while Scanlan was celebrated for her leading actress role in After Love.

Oscar frontrunners Troy Kotsur and Ariana DeBose scooped prizes in the supporting categories at the ceremony.

Deaf star Kotsur, who was named best supporting actor for family drama Coda, spoke on stage with his interpreter and made a joke pitch for his next role. 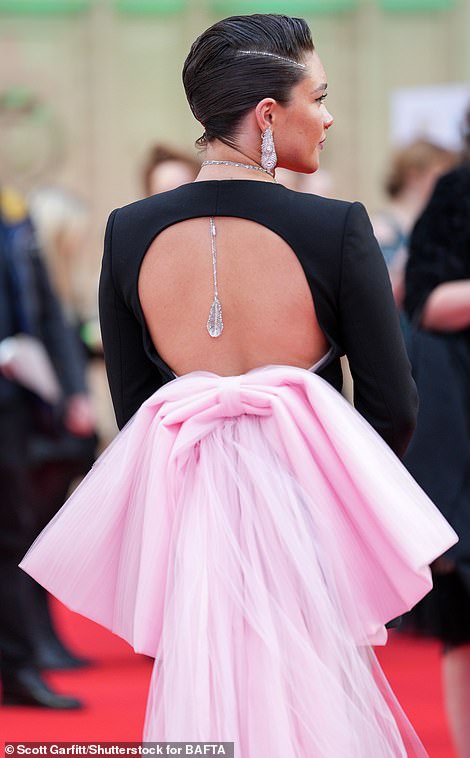 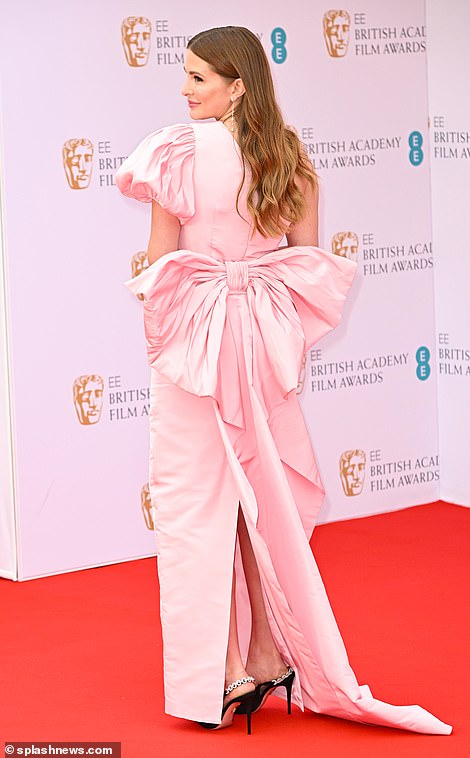 Oh bow! Oversized bows were a major trend but Florence Pugh and Millie Mackintosh both failed to tie up a place on the best-dressed list 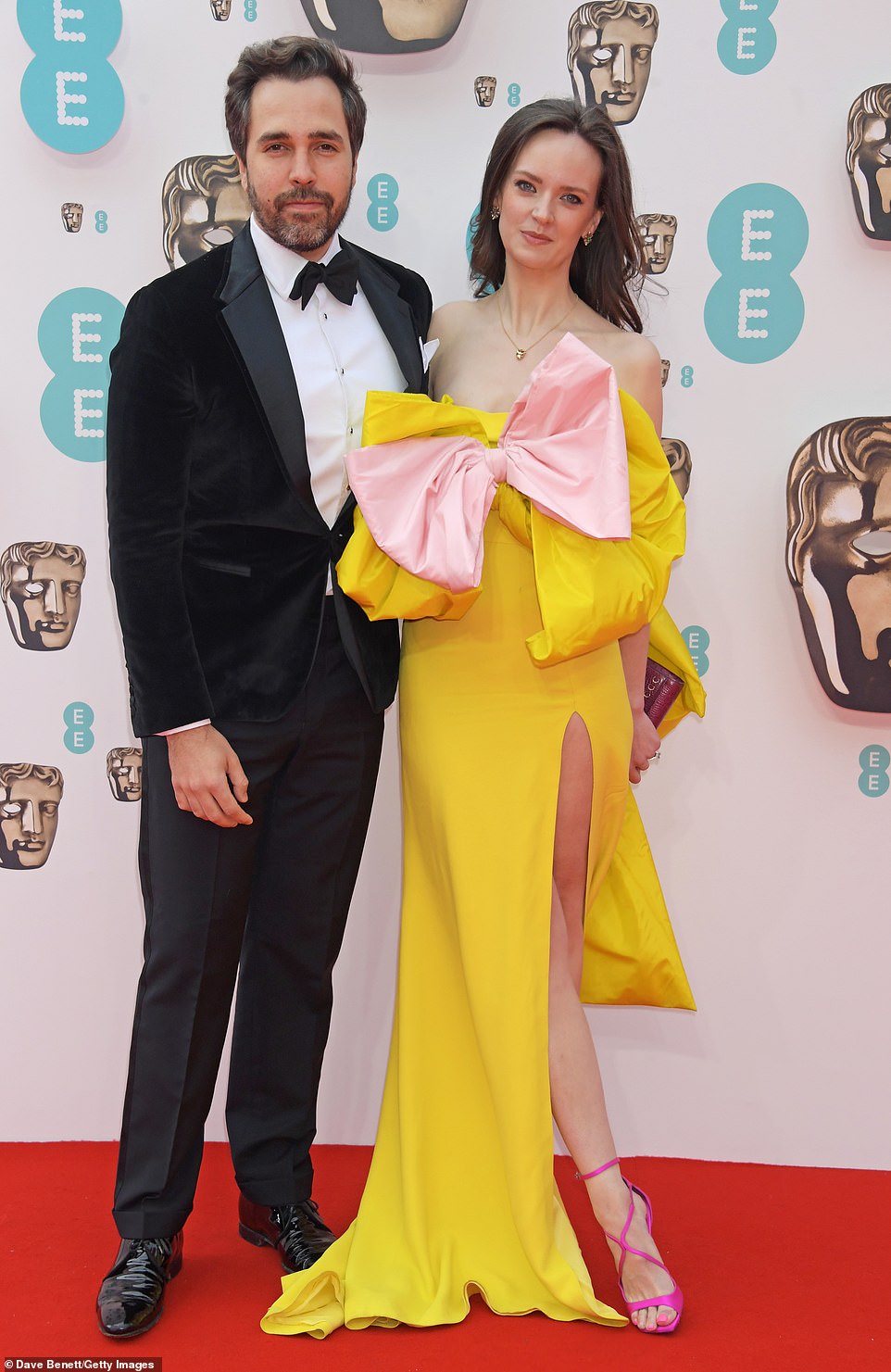 A lot going on: Director Charlotte Carroll (right) also failed to impress with her vibrant clashing pink and yellow ensemble

DeBose picked up the supporting actress prize for her turn as Anita in the remake of West Side Story while Lynch collected the EE rising star award, the only Bafta prize voted for by the public, from last year’s winner Bukky Bakray.

Lynch said: ‘I’m grateful for a working-class foundation that has taught me everything I need to know about failure, about noes and what noes mean and how to celebrate your yeses.’

She continued: ‘I would like to thank the women of this country who taught me what it is to be in this industry as a dark-skinned woman. I thank you for laying the foundation for people like me.’

Sir Kenneth issued a plea for cinema to exist alongside streaming services as he collected the outstanding British film prize for Belfast and thanked people for going to see it on the big screen.

He said: ‘All hail the streaming revolution but all hail the big screen too, it’s alive, and long may they live together.’

Blockbuster Dune, directed by Denis Villeneuve and based on Frank Herbert’s 1965 novel, picked up five wins on the night for special visual effects, cinematography, sound, original score and production design.

Disney juggernaut Encanto was named best animated film, while Summer Of Soul (…or, When The Revolution Could Not Be Televised), directed by The Roots star Questlove, was named best documentary.

She took to the stage in a sparkly red gown and said: ‘I might look a bit different from the last time you saw me here.’

Referring to a picture of her at the 2020 ceremony that appeared on screen, she added: ‘That was me two years ago and since then I’ve done quite a transformation – I hope JK Rowling still approves.

‘Everyone is asking me, why did you lose weight? Clearly it was to get the attention of Robert Pattinson.’

She continued: ‘I didn’t lose weight just to get a guy, I did it to get more acting roles.

‘Now I can play the non-funny love interest in an Adam Sandler film.’

Wilson also quipped that she would be taking over from Daniel Craig as the next James Bond, adding: ‘Because of the gender pay gap I actually won’t be 007, I’ll be 004.5’

The star, who had promised she would not shy away from daring jokes, later added: ‘I was going to do a musical number as host – it was about Prince Andrew.

She also made a joke about the Sussexes ahead of showing the nominees for outstanding British film: ‘From drama to horror to fantasy, Harry and Meghan’s interview with Oprah had it all’.

The Duke of Cambridge, who is the president of Bafta, was absent from the ceremony this year but recorded a video message in which he congratulated those nominated and praised the work of Bafta’s breakthrough programme, a year-long mentoring and guidance initiative, saying it ‘helps people achieve their true potential’.

The EE British Academy Film Awards aired on BBC One on Sunday night.

Has Keir Starmer got a serious case of Long Corbyn?

The film! The parties! The scandals! Everything you need to know about Cannes 2022