An even more infectious version of Omicron is now dominant in England, health chiefs revealed today.

BA.2 was behind 52 per cent of all Covid infections in the seven days to February 20, up from 19 per cent a fortnight ago, the UK Health Security Agency found.

The sub-variant has completed its rapid rise to dominance just a month after it was first spotted in the UK.

But the scientific community has said there is no reason to panic, with the variant already almost every case in Denmark but leading to no effect on  hospitalisations or deaths.

The Government there deemed the strain such a non-threat that it has ended virtually all Covid restrictions — like England did this week.

There is so far no evidence BA.2 is more severe or better at evading vaccine-induced immunity than the original Omicron.

And Professor Paul Hunter, an infectious diseases expert at the University of East Anglia, told MailOnline it was unlikely to even cause cases — which have been falling for weeks — to pick back up.

Writing in today’s report, the UKHSA also revealed 32 cases of ‘Deltacron’ had now been spotted in England.

The hybrid of Omicron and Delta emerged January 7, in a person who had both variants at the same time.

It has triggered just two infections in the past week.

Britain’s Covid cases have fallen consistently for the last three weeks, while deaths and hospitalisations are already trending downwards. 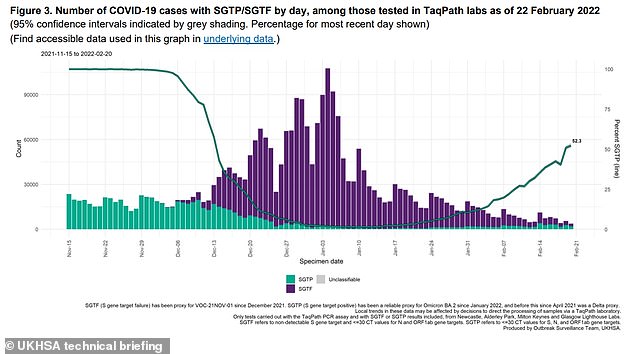 The above graph shows that BA.2 – a sub-variant of Omicron – is now behind 52.3 per cent of all Covid cases in England. It is now dominant over old Omicron 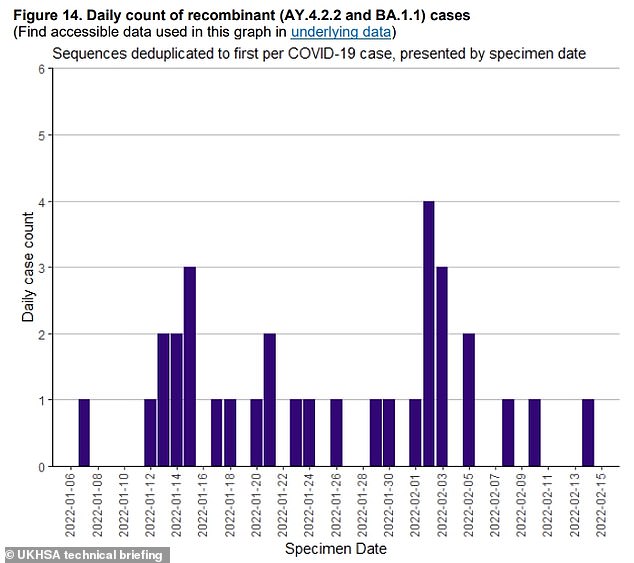 Government scientists also said they had detected 32 cases of ‘Deltacron’. But the hybrid appears to have fizzled out rather than taking off in a promising sign

BA.2 carries many of the same mutations as Omicron alongside many new ones that make it more transmissible.

But, unlike its parent, it carries an S-gene meaning it can be easily distinguished from the original Omicron without the need for genomic sequencing.

It claimed securing a supply of vaccines early on in the pandemic was ‘crucial’ to its success and this helped to ‘save lives and reduce serious illness and hospitalisation’.

The independent watchdog warned there were still risks ahead for the programme, however, including staff burnout.

In a report released today, covering a period up to the end of October 2021, the NAO said wastage of about 4.7 million doses – 4 per cent of the total – had been ‘much lower than the programme initially assumed’.

Delta also has an S-gene, but the variant has been completely eradicated in the UK by the two much more virulent strains.

Professor Hunter said: ‘Ultimately, we could have done without BA.2, but it will not make too much of an impact.’

He added: ‘I don’t think BA.2 is going to undermine the current drop in cases.

‘The consensus opinion of epidemiologists that I’ve listened to is that it is probably not going to be something that will undermine our position.’

A fortnight ago the UKHSA revealed it had spotted the UK’s first case of the so-called Deltacron in England.

The agency said they were keeping tabs on the hybrid, but that it was not concerning because there was no noticeable uptick in cases.

Scientists also called for calm, saying it ‘shouldn’t pose too much of a threat’ because the UK has such high levels of immunity against both Omicron and Delta strains.

Despite the rise in BA.2, Government dashboard data shows that Britain’s cases, hospitalisations and deaths are all trending downwards even as the more infectious version of Omicron became dominant.

It has given Boris Johnson the confidence to lift the final Covid restrictions, with self-isolation coming to an end yesterday for the first time in almost two years.

Free Covid tests are also set to end from the start of April, ministers have announced, in a drive to save £2billion a month.

Mr Johnson said he could lift the final Covid restrictions because of widespread immunity and the mildness of Omicron.

But he warned this was not victory over the virus, adding that it was not yet ‘going away’.

SAGE scientists have warned the mildness of Omicron may be a ‘chance event’, and say it is a ‘common misconception’ that viruses become weaker overtime.

But other scientists argue that high levels of immunity in the country mean it will not experience a Covid wave like in March 2020 again.