Brain scans from people who have been infected with Covid-19 have revealed tissue damage and shrinking in regions of the brain linked to smell, according to researchers.

During their study scientists from the University of Oxford examined the brains of 785 participants aged 51-81 who had received MRI scans both before and after infection.

A total of 401 participants tested positive for infection with Sars-CoV-2 between their two scans, of whom 15 were admitted to hospital.

According to scientists, brain scans revealed the effects of the virus included a greater reduction in grey matter thickness in the regions of the brain which are associated with smell and the memory of events.

Participants who had Covid-19 also displayed evidence of tissue damage in regions of the brain linked to smell, and an average reduction in whole brain sizes.

On average, the participants who were infected with SARS-CoV-2 also showed greater cognitive decline between their two scans, associated with the atrophy of a brain region known as the cerebellum, which is linked to cognition.

The findings from the study, which were published in the journal Nature, now provide evidence of changes to the human brain following a Covid-19 infection and the emergence of ‘Covid brain’.

However it is not yet clear whether the cognitive decline can be reversed over time.

Scientists from the University of Oxford examined the brains of 785 participants aged 51-81 who had received MRI scans both before and during the pandemic. (Stock image) 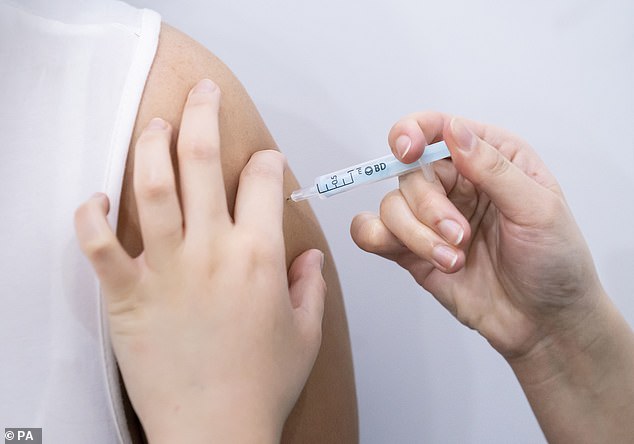 Findings from the study show that the virus does have an impact on brain function. Pictured: A person is vaccinated against the virus in Leeds

Dr Max Taquet, NIHR Oxford Health BRC senior research fellow at the University of Oxford, said: ‘This is the first large-scale study to investigate the actual changes in the brain that can occur after a Covid-19 infection.

‘It is well established that Covid-19 infection is associated with subsequent risks of neurological and psychiatric problems in some people including brain fog, loss of taste and smell, depression, and psychosis.

‘But why this occurs remains largely unknown. This study starts to shed light on this important question by showing that brain regions connected to the ‘smell centre’ of the brain can shrink after Covid-19 in some people.

‘These brain changes were not observed in every patients and they were mostly subtle.

‘These findings might help explain why some people experience brain symptoms long after the acute infection.

‘The causes of these brain changes, whether they can be prevented or even reverted, as well as whether similar changes are observed in hospitalised patients, in children and younger adults, and in minority ethnic groups, remain to be determined.’

The study looked at those who had received brain scans before and during the pandemic as part of the UK Biobank study – a large database that includes genetic and health information on half-a-million people living in the UK.

The authors identified various long-term effects following infection – with an average of 141 days between participants receiving a Covid diagnosis and the second imaging scan.

The latest research comes after scientists at the University of Edinburgh uncovered more than a dozen genetic quirks that may explain why some people are more vulnerable to severe Covid than others.

Up to 16 changes to DNA were found in patients critically ill with the virus, many of which are involved in blood clotting and inflammation. 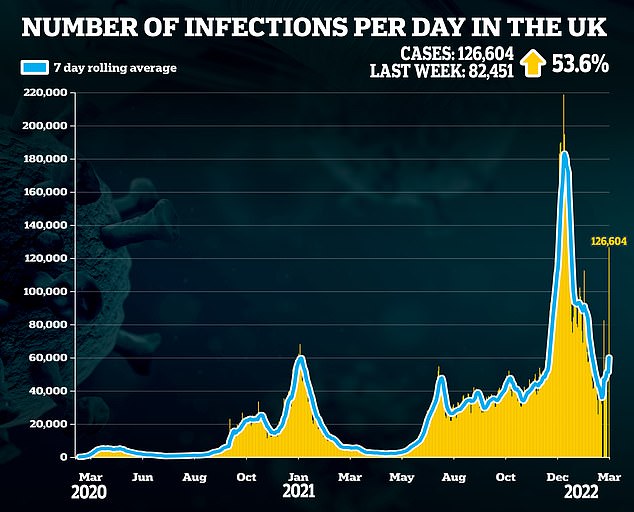 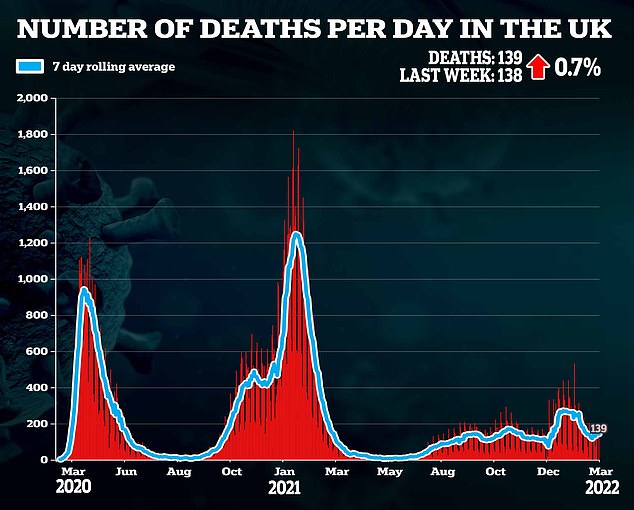 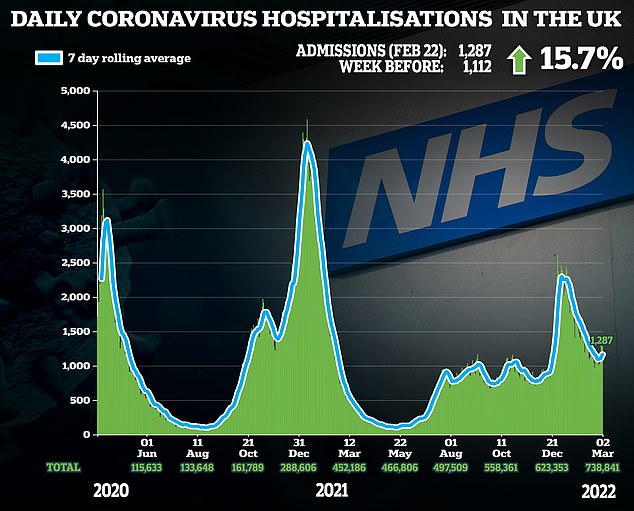 One genetic variant was found to be slower at signalling to the immune system that cells were under attack from the virus.

Having just one of the genes could be the difference between getting a cough or being admitted to intensive care, according to the biggest study of its kind.

Almost 30million people in England have managed to avoid Covid since the pandemic began, No10’s scientific advisers believe amid warning signs that the outbreak is growing again.

Cambridge University scientists tasked with tracking the pandemic suspect only 51.8 per cent of the population has caught the virus in the last two years.

Experts told MailOnline they were ‘not particularly concerned’ by the fact that half of the country have not been exposed to the virus.

It ‘doesn’t mean the rest are susceptible’, according to Dr Thomas Woolley, a mathematical biologist at Cardiff University.

Officials estimate that 98 per cent of people in England have antibodies against Covid thanks to high vaccination rates and the combination of jabs and natural immunity has shown to provide the strongest protection.

As part of the Government-funded research, experts at the University of Edinburgh studied the genes of more than 57,000 people across the UK, including 9,000 Covid patients.

The study, partly funded by the Department of Health, did not break down the risk of becoming severely ill per gene, or which Britons might be more at risk then others based on their heritage.

However, they said some genes were linked to a doubling of the risk of severe illness from Covid.

This is not the first time studies have found different genes could predispose certain people to becoming severely ill with Covid.

But the scientists hope the latest finding will help identify new drugs and treatments in the future.

Government dashboard data revealed the combined infections on Saturday, Sunday and Monday were 54 per cent higher than the total last week.

Officials have stopped releasing the daily figures at weekends as part of a wind-down of the way the pandemic is reported, meaning a three-day total is released every Monday.

Another 139 Covid fatalities were registered over the weekend, up by one on the 138 last week.

Meanwhile, latest hospital data showed 1,287 admissions were recorded on March 1, up 15 per cent on the tally from a week ago.

The flare-up in infections comes after England’s ‘Freedom Day’ on February 24 and amid the spread of a more infectious version of Omicron.

BA.2 was behind 52 per cent of all Covid infections in the seven days to February 20, the UK Health Security Agency found.

The sub-variant has completed its rapid rise to dominance just a month after it was first spotted in the UK.

But the scientific community has said there is no reason to panic, with the variant already almost every case in Denmark but leading to no effect on hospitalisations or deaths.

Experts warn the more infectious variant may cause some fluctuations in case rates, but say there is no evidence the strain is more likely to cause severe disease.

‘I’m not panicking – I’m not thinking we should suddenly go back to restrictions or protections, but I am concerned,’ he said.

‘As we mix more, the virus gets more opportunities, so we’ve got 10,000 cases a day, we’ve had a little bit of an increase in those in hospital – it’s not huge, so people shouldn’t panic, but this disease is not over and it’s not done with us.’

He stressed the importance of vaccine uptake to allow for the continued suppression of the virus.

‘You should still be cautious, particularly around those who are vulnerable,’ he said.

‘So get your vaccine, particularly if you’re getting a letter now if you’re in one of these elderly groups, or vulnerable groups. 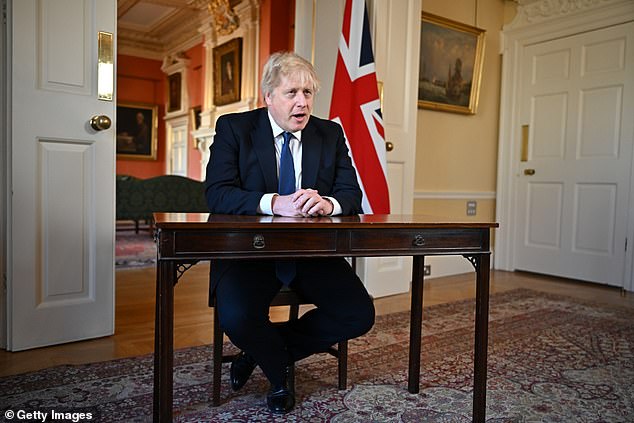 ‘Test – because that testing is still available – and follow the guidance.’

Last month the government ended its Covid laws that it had introduced to tackle the pandemic.

Boris Johnson said England was exiting the ‘grimmest years in our peacetime’ as he unveiled his ‘Living With Covid’ strategy.

And health secretary Sajid Javid described how the day would  go down in the history books — as an ‘important’ next step in a new phase of the pandemic.

But he urged people to remain ‘sensible’ in the next stage of the country’s battle with Covid, warning that the virus ‘is not done with us’ with new and challenging variants expected to emerge.