Scientists are investigating whether a vaccine for cancer can be developed using the same mRNA technology as in COVID-19 jabs.

A team at Duke University in Durham, North Carolina, has begun testing jabs that can recruit the immune system to latch onto and kill cells that are replicating uncontrollably, stopping the disease in its tracks.

The potential vaccines are being heralded as a ‘game-changer’ that could help overcome America’s second-biggest cause of death.

Research comes as part of a larger movement to incorporate mRNA technology into more forms of treatment after the long-unused technology emerged during the pandemic due to its ease of development and manufacturing.

Zachary Hartman (pictured), an assistant professor in immunology at Duke University, North Carolina, said: ‘If we can roll this out in the clinic for cancer, we think it could be a game-changer’

‘If we can roll this out in the clinic for cancer, we think it could be a game-changer,’ Dr Zachary Hartman, an assistant professor in immunology at Duke, told WGHP.

The mRNA shots, manufactured by Pfizer, which partnered with the German-based BioNTech, and Moderna, proved to be one of the most effective developed.

While the technology was discovered decades ago, it largely went unused before the pandemic brought it to the forefront of vaccine development.

What is a cancer vaccine? Are any available?

A cancer vaccine aims to recruit the immune system to fight off the illness.

Cancer is not triggered by a virus, but occurs when cells start dividing un-controllably due to a mutation.

These cells may have a unique antigen on their surface compared to healthy ones.

Cancer vaccines display this to the immune system, sparking an immune response.

Scientists say this then leads to the immune system hunting out and killing cancerous cells.

Only one cancer vaccine — for prostate cancer — is available to date.

It involves white blood cells being extracted from the body and exposed to antigens from cancerous cells.

These are then re-administered where scientists hope they will fight off the illness.

But the treatment, available to late stage cancer patients, does not appear to lead to tumors shrinking and only gives men who receive it a few additional months to live.

Now, companies and scientists are further exploring how to use mRNA, and whether it can hold the answers to solving some of medicines biggest mysteries.

”Remember, people were expecting that a successful vaccine would provide protective immunity to about 50 percent of patients,’ Hartman said of the mRNA Covid shots.

‘(But) the first two mRNA vaccines provided over 90 percent protection, a remarkable achievement.’

Currently only a jab against prostate cancer for those with the disease is available, which prolongs patients’ lives by a few months.

Hartman believes that mRNA could change the way cancer is treated.

‘I think that within my lifetime we will see cancer as a more managed disease,’ he told the North Carolina-based local news station.

‘We’re going to turn the dial and be able to treat more and more of these kinds of cancers in the coming years and decades to where it’s not quite the same sentence it was 20 or 30 years ago.

It is currently in Phase II trials, and being tested on 39 women. Results are expected later this year.

Scientists have been developing vaccines to prevent cancer or treat the disease in patients that already have it for years.

Unlike Covid, cancer is not triggered by a virus but when cells start dividing uncontrollably due to mutations.

These cells may have a unique protein on their surface compared to others that are healthy.

Scientists say a jab against cancer would work by exposing the body’s immune system to this protein.

It is hoped this would lead to the body’s defenses hunting out and killing cancer cells, stopping the disease.

But some scientists warn a cancer vaccine may never work because for patients their immune system is normally already heavily weakened.

They also warn that in some cases cancer cells may not look different from healthy cells in the body, meaning cancer jabs could not be used.

Only one cancer vaccine — against prostate cancer — has been approved for use in the U.S. to date. 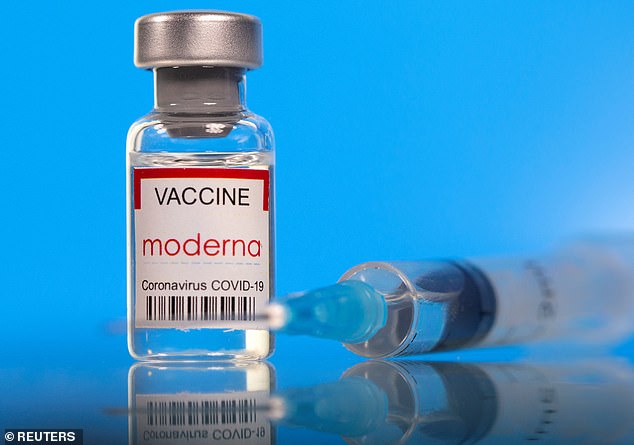 It is specially tailored for each patient, and made by extracting white blood cells and mixing them with proteins from prostate cancer cells.

The white blood cells are then re-administered into the body.

The treatment is currently only available for late-stage cancer patients.

It has has not been shown to stop the illness or lead to tumors shrinking, but can prolong patients’ lives by a few months.

Scientists hope that by developing mRNA-based shots against cancer they may be able to develop better shots.

mRNA jabs use part of a genetic code called messenger RNA, or mRNA, and would work by tricking the body to produce a harmless part of cancer cells.

This will help the body to recognize them as a potential danger, and hunt out cells with this.

Duke scientists are yet to reveal which cancer they are targeting with their mRNA shots, or whether their jab will aim to prevent or treat cancer.

The technology is also being explored elsewhere as well, with leading vaccine manufacturer Moderna entering trials for a flu shot, and even an HIV vaccine with an mRNA base.

Cancer is the second biggest killer in the U.S., leading to more than 600,000 fatalities every year.

Lung cancer is the leading cause of cancer death, behind almost a quarter of fatalities, followed by cancer of the colon and rectum and pancreas.

Covid vaccines using mRNA technology have made up the bulk of those dished out across the U.S.

Developed by Pfizer and Moderna, the jabs have been given to millions of people across more than 82 countries.

Initial studies showed the jabs were up to 95 percent effective at preventing illness with Covid. But protection from them was found to wane over time.